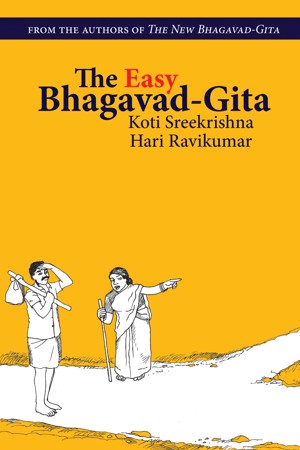 Krishna's universal message applies to the whole of human life, for it is an extension of his colorful, multi-dimensional personality: king, warrior, strategist, statesman, philosopher, musician, charmer, and above all a joyful participant in the game of life.

The Easy Bhagavad-Gita is so exceedingly easy that a 5000 year-old discourse feels intimate, accessible, and contemporary. And it is a great place to start if one wants to know about India’s grand heritage, religion, art, culture, philosophy, and spirituality.

Koti Sreekrishna, PhD (b. 1953, Bangalore) studied biochemistry and worked as a research fellow with the Baylor College of Medicine and the University of Kentucky. After working with Phillips Petroleum Company and Marion Merrel Dow, he is currently a senior scientist in the Global Biotechnology division at the Procter & Gamble Company. His interests include philosophy, inter-religious dialogue, and studying the Hindu scriptures. He has previously authored a translation of the Purusha Suktam, a Hindu creation theme. He has served in the executive council of Hindu Society of Greater Cincinnati (HSGC) for several years and contributes articles to HSGC-Temple magazine. He is a distinguished Toastmaster.

Hari Ravikumar, BE (b. 1984, Bangalore) studied mechanical engineering and then trained and worked as a software programmer with Infosys. Then he worked as the content manager of the Melton Foundation and also as the administrative director of the Subramaniam Academy of Performing Arts. He recently worked as a UI designer and product strategist with Ice Cream Labs, a Bangalore-based technology startup. He is on the advisory board of Pramiti, a school promoting alternative education. He is interested in Carnatic music, Eastern wisdom, mathematics, martial arts, comics, languages, and films. He co-wrote Roots and Wings, a book about the significance of human values.

You have subscribed to alerts for Koti Sreekrishna and Hari Ravikumar.

Would you like to favorite Koti Sreekrishna and Hari Ravikumar?

You have been added to Koti Sreekrishna and Hari Ravikumar's favorite list.

You can also sign-up to receive email notifications whenever Koti Sreekrishna and Hari Ravikumar releases a new book.