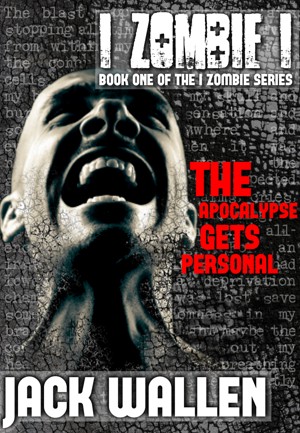 By Jack Wallen
Rated 4.17/5 based on 6 reviews
All he wanted was a Pulitzer.

It took only one bite for journalist Jacob Plummer to find the story of a life time -- his own downward spiral into the zombie abyss.

As Jacob slowly transforms into one of the undead, he discovers a truth that could spare the world from extinction.

While Jacob struggles to reveal the conspiracy behind the virus, he must fight off his own inner zombie and the undea More
All he wanted was a Pulitzer.

It took only one bite for journalist Jacob Plummer to find the story of a life time -- his own downward spiral into the zombie abyss.

As Jacob slowly transforms into one of the undead, he discovers a truth that could spare the world from extinction.

While Jacob struggles to reveal the conspiracy behind the virus, he must fight off his own inner zombie and the undead masses to save the human race, the woman he loves, and a planet ripped apart by the Mengele Virus.

Jack Wallen is what happens when a Gen Xer mind-melds with present day snark. Jack is a seeker of truth and a writer of words with a quantum mechanical pencil and a disjointed beat of sound and soul. Although he resides in the unlikely city of Louisville, Kentucky, Jack likes to think of himself more as an interplanetary traveler, on the lookout for the Satellite of Love and a perpetual movie sign...or so he tells the reflection in the mirror (some times in 3rd person). Jack is the author of numerous tales of dark, twisty fiction including the I Zombie series, the Klockwerk Movement, the Fringe Killer series, Shero, The Nameless Saga, and much more.

I Zombie I Teaser
The apocalypse is personal now.

2nd Teaser
Similar to the first teaser with different music (written by Josh Sellers) and images of the new cover for the book.

I'd never read zombie horror before, though I DO enjoy the occasional horror novel. I read Wallen's Fringe Killer series and his "Shero" before moving on to this and I have to admit--I should have read this one first.

This book is awesome. It has the author's trademark lyrical writing that tends more towards literary prose. It also has the cringe-worthy, skin-crawling gore and horror that Wallen does so well. He is a true horror writer, through and through. I fell in love with the protagonist, as well as the feeling of being inside Jacob's journal during the zombie apocalypse. I'm looking forward to picking up the next book in this series!

I Zombie I starts with a bang, literally right from the first line ‘The blast ripped through the air, stopping all time and thought’. So from the get-go, if you can’t stand the long wind up at the beginning of some Zombie novels, this book will appeal to you.
Jacob, a reporter, is awoken by the bang and the subsequent obliteration of most of the human population. Unfortunately, the human population reanimates and is quickly roaming the streets of Munich, on the search for lunch…..
This book has some good elements that aren’t the standard zombie fare – there are different types of zombies, a mad scientist and a very likable feisty red-head female lead who is pretty damn impressive in her knowledge and ability – a top choice to be with during the Zombie apocalypse.
And my favourite part of all is, you’ll never guess the ending.
A well written book and I’ll certainly be reading the next installment!

Mr. Wallen takes the story of Jacob Plummer, a reporter, and documents his descent into Hell. I could tell you what that Hell is but then I would have to kill you.

You meet some very interesting characters including, Susan, a young teenager who reminded me of the teen from 28 Days Later and Bethany Nitshimi, definitely the tough woman of the novel.

All I can say is this book is well written and the best book I have read in the horror genre. It is up there with Full Dark, No Stars by Stephen King and The Dome, which is one of my favorite books of all time.

Mr. Wallen, like Mr. King, is a genius at making a never-gonna-happen event like a zombie take-over, seem not only realistic but plausible. Well done.

Amazon paperback or Kindle
In mere seconds, most of the world's population has been destroyed and died. That is bad enough, but a majority of these unlucky people have gotten up and begun walking. Unluckier still is our protagonist Jacob Plummer, a reporter untouched by this mystery virus. I say unluckier because Jacob is now forced to attempt to survive in this new world and he has taken it upon himself to find out the cause for this catastrophe.

Unfortunately, Plummer is soon infected and his search for the truth is now filled with an urgency to find a cure or at least ease the pain. This search brings forth information that is fraught with deadly intrigue....deadlier than anyone could have ever imagined.

With new friends, Jacob helps to fight off the growing undead horde in
hopes of saving himself and the planet from the rot growing within.

I Zombie I by Jack Wallen is funny, sad, tragic and a much deeper story than it may be given credit. Jacob Plummer, journalist turning zombie, offers seeks out that tiny a bit of hope for a world that has been destroyed by science. I liked Jacob, he was a good guy, someone who I think I might actually have enjoyed having as a friend. He had a bit of an agenda initially, but that agenda began to change as he saw what he was facing. He had flaws, some he admitted to having others we the readers can pick out, which means he was realistic and believable. Something I like in a character. Jacob's love interest Bethany was a kick...I liked her spunk and how she was a fiery redheaded nerd. (Nerds rule!) Oh and people, including fictional characters, who scream all the time during a zombie apocalypse where you have to be quiet, need to be shot. I'm not getting killed because you can't keep your mouth shut.

The story started off a bit on the slow side, but it did pick up pace eventually. The author created an interesting concept as to how almost the entire world's population was killed and brought back as undead. I Zombie I was descriptive, but not overly gory in its depiction of the violence the undead inflicted on the living and each other. Due to Jacob's having been bitten, the reader gets to learn a bit of how zombification feels and the reason for the need to ingest the gray matter of humans.

(reviewed 4 months after purchase)
linda leslie reviewed on on July 1, 2011

trangely enough, I bought this book as an ebook before I even had a Kindle (Though it is available in paperback on Amazon's US site.). It just looked that good.

I really, truly enjoyed this book. Particle physics, a crazy scientist with a doomsday machine, zombies roaming the streets of Munich hungry for brains. What's not to like?

Plus I love the humor and the 80s music references. What can I say? I'm old school like that.

I thought the story had a unique twist to the telling, as well. It sucked me right into the middle of the zombie apocalypse and I could hardly put it down. The book, that is. Not the apocalypse.

There were a couple of plot points that seemed to be unfinished, but I'm assuming that's because this is the first of a trilogy, so I look forward to seeing them answered.

All in all I consider this a great read and highly recommend it to all zombie lovers. Or lovers of zombie stories. I'm very much looking forward to the next in the series.

You have subscribed to alerts for Jack Wallen.

You have been added to Jack Wallen's favorite list.

You can also sign-up to receive email notifications whenever Jack Wallen releases a new book.