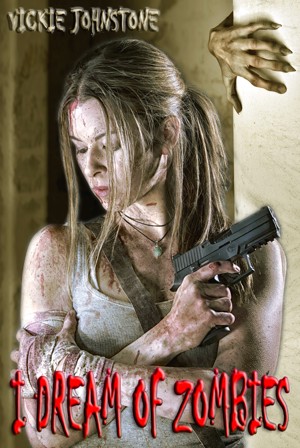 I Dream of Zombies

By Vickie Johnstone
Rated 5.00/5 based on 3 reviews
It starts with a dream and then the nightmare takes over...

It all begins on a summer’s day with the media reporting with some hilarity that people are dreaming of the dead coming to life, but those who have dreamt them are convinced they are a warning of things to come. Marla, her sister Ellen and friend Tommy find themselves fighting for their survival as their sense of reality is smashed. More
A zombie novel set in London over six weeks in 2013, with a strong female lead character.

It starts with a dream and then the nightmare takes over.

It all begins on a summer’s day with the media reporting with some hilarity that people are dreaming of the dead coming to life, but those who have dreamt them are convinced they are a warning of things to come. Marla takes it all with a pinch of salt until she experiences the nightmares herself. Cue paranoia and disbelief until reality shows its new face.

All over London there are incidences of people becoming sick and aggressive. As the attacks mount, the media is forced to take the matter seriously, but what is causing it? Is it a virus, and is it natural or man-made, and is the government responsible?

Marla, her sister, Ellen, and friend Tommy find themselves fighting for their survival as their sense of reality is smashed. Will the army and police maintain control or will the country find itself in lock down, isolated from the outside world?

“This book's strength lies in two areas: character development...[and] the graphic descriptions of zombie attacks and their effects.” - Stewart Bint.

"I am pleased to say Vickie has written the novel I have been waiting for. I do not want to give the game away too much but will say there are no cop outs in this book which makes a change. Recommended." - AM Campbell

Excerpt from the novel... the dream...

"A sickening sense of dread ravages him as fear drifts over the surface of his skin like fingers, icy cold and unrelenting. He turns again and sprints towards the exit, his pace becoming increasingly slower as if something is pushing him back. Yet still he finds himself in the exact same position, his feet rooted to the spot, his arms sweeping, useless. His hair blows in the breath that the creature now turns on him, sickening in its putrid scent of death and putrefaction. There is not a word he can think of to describe this thing in front of him. Fear creeps, regardless. Twisting, crawling, the maggots swarm across its bloodied face as it opens its mouth wider. Something rips. The yawn seems to swallow him whole into this darkness of despair as a jagged, ripping pain overwhelms him; the sharp teeth chafing, gnawing at his neck, seeking to pierce the jugular vein within. From far off in the distance comes the ripple of laughter."
Available ebook formats: epub mobi pdf rtf lrf pdb txt html
First 3% Sample: epub mobi (Kindle) lrf more Online Reader
pdb
Price: $0.99 USD
Buy Add to Library Give as a Gift
How gifting works
Create Widget
Tags: thriller horror adventure zombies heroine london apocalyptic monsters undead suspense action horror action female action hero horror action zombie
About Vickie Johnstone

Vickie Johnstone lives in London, where she works as a sub-editor on business magazines. She has a thing about fluffy cats and also loves reading, writing, films, the sea, art, nature, white chocolate and travelling. Vickie has self-published 16 books.

Also in Series: I Dream of Zombies

This is an extreme departure from the normal children and young adult fair this reader is used to purchasing. But it is a highly entertaining and original departure. I didn't realize at first that I was reading the first installment in a series of books. So upon reaching the conclusion, I was delighted to learn I could read more of these great characters.

What I liked most about the cast of characters in this novel was the diversity of backgrounds and personalities. Two heart warming children, a lovable retriever, a sweet older couple, a pair of thirty something ex-military buddies and a young single girl who meets a potential soul mate in the midst of this horrifying journey through an un-dead strewn England. Throw in a bit of paranormal intrigue and you have a very compelling premise indeed.

The action is nearly non-stop as these very endearing characters are revealed more in action than described in narrative. A skillful blend of story telling and humor mixed with adventure, horror, and violence. Excellent for the serious horror fan but complete enough to entertain any reader of any age.

I Dream of Zombies gave a new twist on the genre. How can all of a sudden X amount of the population started dreaming the same dream about the same thing. Zombies and then the zombies are on your door step. Would you believe or would you be a naysayer? Would you prepare or would you carry on as usual?
The story was very well developed and written, the characters are believable and honest. I really enjoyed this story and look forward to the next installment and the answers to the many question that where hinted at by even the characters.

“I Dream Of Zombies” is an ideal read for lovers of this particular genre.

While the plot has been seen in many guises in both film and book over the years – i.e. zombies over-running an area and threatening the very survival of a country or even the world – this book’s strength lies in two areas:
First: character development. I was rooting for one particular character, Ellen, right from the start because of the way Vickie Johnstone defines her vulnerability and reliance on those around her. Ellen’s vulnerability is the real backbone of the story.
And then, while I felt her protectors, Tommy and Marla, could look after themselves, their characters grew and blossomed as an increasing number of other vulnerables, including two young children and two elderly people, join the band of travellers seeking sanctuary from the zombies.
Second: the graphic descriptions of zombie attacks and their effects. Having fled London before the zombie horde really took hold, our heroes later have to make a journey back into Tottenham, and we are treated to descriptions of the carnage there, which adds intensity to what could happen to the rest of the UK if the zombie virus is left unchecked.

Vickie Johnstone intersperses the horror and action with a little humour (okay, fans of a well-known soccer team won’t find the destruction of their ground funny, but rival fans will!) and moments of tenderness – I’m thinking here of a conversation between the two sisters on a narrow boat.

While the book moves nicely to a largely satisfying conclusion as far as our band of refugees are concerned, two questions remain. However, it is extremely likely that those answers will be forthcoming as Vickie Johnstone continues her fascinating story in the next book in the series.

As a lover of this genre I give “I Dream Of Zombies” five stars, and eagerly await its sequel.

You have subscribed to alerts for Vickie Johnstone.