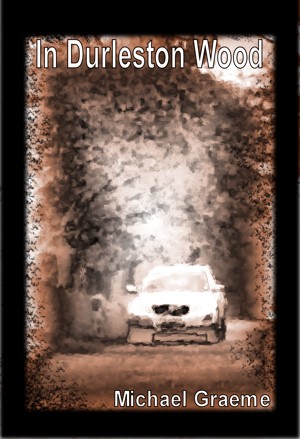 Reviews of In Durleston Wood by Michael Graeme

This is a strange book, both intriguing and somewhat mystifying. Its description pretty much lays out the basic plot setup. Richard Hunter, the first-person narrator, is indeed a mess, both socially and psychically. He freely admits his state of depression and muddlement, often berating himself for his thoughts and actions. I found myself by turns impatient and sympathetic with him, and more than once did some mental eye-rolling. Perhaps that's a normal reaction to one who is a romantic and does not always act rationally. On the other hand, Richard's frequent visits to his aged father, and his appreciation of Chelsea, the care home employee who attends the father, are reassuring indications of his fundamental decency.
Then there are the two women between whom Richard vacillates. I must say I didn't warm up to either of them. Davinia, the blond object of his apparently hopeless infatuation, is presented as a kind of ice princess. Some of her flirtatious conversations with Richard struck me as unlikely, but that may be due to the limitations of my perspective. The incident from which Richard rescues her is, I think, described in unnecessarily vague terms.
Lillian, the prisoner of a man described as a "villain," is at best enigmatic, at worst a role-playing schemer. On the one hand, her situation demands sympathy, but her secretiveness did not generate enough trust to make me regard her as a sympathetic character. At times I wondered if the women were never meant to be fully-realized individuals, but instead represented "types" created to appeal to different aspects of Richard's personality.
All that said, I read the book with interest, largely because I couldn't imagine how it might end. The lyrical descriptions of the setting, both the enchantments of the wood and its besmirching by intruders, are definitely worth reading. I recommend this book to readers of literary fiction who enjoy books that make them think and wonder.

This is an impressive and intriguing psychological novel, whose undercurrent of violence/threat and sexual tension reminded me of some of Ian McEwan’s work.

Although he may sound like a hopeless case, Richard, the central character, proves to be an engaging and sympathetic narrator, with a keen observational sense and a high degree of self-awareness. This prevents him from wallowing in self-pity and allows him to see the occasionally humorous side of his own predicament.

And then there is the question of how much of what we are reading is actually real. After all, here we have a central character who spends quite a lot of his time wandering around Durleston Wood, sometimes holding imaginary conversations with previous girlfriends from long ago - so who’s to say that certain parts of the novel presented as “reality” aren’t in fact an elaborate fantasy on his part? Come to that, who’s to say that the entire novel isn’t essentially a symbolic representation of competing impulses battling it out in Richard’s head ?

For me, this ambiguity made “In Durleston Wood” all the more complex and intriguing. But you can just as easily take it at face value and read it as a more straightforward mystery/romance. For a longer review, see: