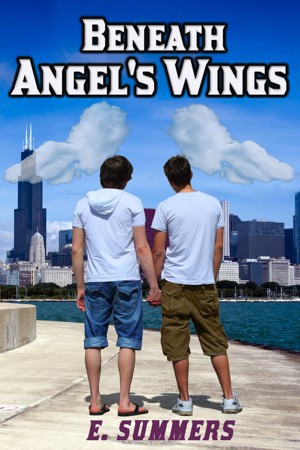 Angel’s life is challenging enough and he has no time to take on other people’s problems, but when he recognizes Adam’s desperation, he can’t turn away. On the spur of the moment, he becomes the younger boy’s protector and introduces him to a new group of friends who help Adam develop the strength and self-confidence to confront and overcome his fears.

The two boys from different backgrounds have little in common, yet their friendship helps them both move toward achieving their dreams. Angel embarks on a road to independence while Adam finds his first love. Then, just when things can’t get much better, Adam faces his worst nightmare and has to make a life-altering choice.

This coming of age novel about a gay teen contains themes that may not be appropriate for readers under fifteen years of age such as attempted suicide, physical and verbal bullying, discussions of including safe sex, and potentially offensive language. .

E. Summers lives in the Chicago area and writes in whatever time can be carved out from family, work, and other obligations. In addition to writing, E. Summers enjoys travel, reading and watching too many TV shows and movies.

Summers passionately believes in the American ideal that all men and women are created equal and deserve equal rights and protections. This is especially true for LGBTQ kids, who too often face what they perceive as insurmountable prejudice and hate, not just from their peers, but from their families and communities as well. To support this cause, Summers will donate half of the proceeds from the sale of Beneath Angel’s Wings to charitable organizations whose goals are to improve the lives of LGBTQ youth.

After years of writing various forms of gay literature under other pen names, Beneath Angel's Wings is E. Summers’ first foray into LGBT young adult fiction. Written in part as a response to too many news accounts of bullied LGBT teens taking their own lives, the story shows the ripples of change a person can make in the life of a bullied teen when he or she chooses to do what’s right instead of what’s easy. Although the novel and the characters depicted in it are purely fictional, they are near and dear to the author’s heart and may appear again in future stories.

E Summers loves reader feedback and will factor readers' response to Beneath Angel's Wings in deciding whether to write more books in this series.

You have subscribed to alerts for E. Summers.

You have been added to E. Summers's favorite list.

You can also sign-up to receive email notifications whenever E. Summers releases a new book.