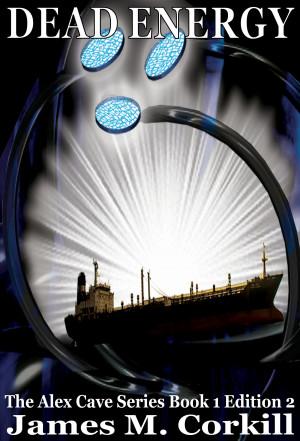 By James M Corkill
Rated 4.00/5 based on 1 review
Global oil supplies suddenly vanish and society starts to crumble in this science fiction mystery. More
While on vacation sailing the waters of the Puget Sound, geophysicist Alex Cave hears a Mayday call and sees a brilliant flash of neon blue light surround an oil tanker. He changes course to help and discovers there was no explosion, no one on board, and the oil has mysteriously vanished without a trace. His only clue is a three-inch crystal found in the empty hold of the tanker.

The Reverend Menno Simons, an environmental fanatic, leads his followers on a crusade to rid the world of crude oil, forcing good people to do horrible things. If he is not stopped, the only law will be that of survival.

Harold Woolley, a mild-mannered man with a domineering wife and two teenagers who do not respect him, gets caught up in the struggle and is forced to find the courage to get his family to a survivalist camp, but it’s not what he expected, and he must fight to save their lives.

Things go from bad to worse as the Alaska pipeline and west coast refineries are suddenly empty! Civilization descends into chaos when the lack of fuel keeps basic necessities from reaching the inner cities, pitting human against human in a desperate attempt to survive the madness spreading across the planet. Alex’s only clue is the crystal, which under a high-powered microscope, appears to be alive.

A fantastic ride, with thrilling scenarios, exhilarating situations, and nail-biting suspense, by this bestselling and award-winning author. How does Alex stop Menno before civilization reaches total collapse?

Review
Hannes Birnbacher reviewed on June 2, 2016
(no rating)
I liked this one. Lots of action! Three stars for good SF.

This is a first-class book, exhibiting little of the spelling, grammar & punctuation errors which distract & detract from so many contemporary novels. The narrative is fast-paced, engaging & surprisingly believable; even disturbingly so. It describes a USA that, distressingly, the world sees all too often: one in which most Usanites are the nicest people, but who collectively form a dangerous nation, one to be feared & shunned, whose citizens seem to delight in turning into packs of selfish, loutish, thieving, murderous animals that, when faced with widespread lack of petrol, justify their foulest of excesses as, 'doing what you have to do to survive.' The story ends with a wonderful & hope-inspiring discovery of a new, non-polluting fuel, as well as a treasure-trove of alien technologies (but, of course, controlled by the real world's leader of the present-day axis of evil, USA.) This book engages from beginning to end and is hard to put down. I look forward to many more stories from James Corkill.

You have subscribed to Smashwords Alerts new release notifications for James M Corkill.