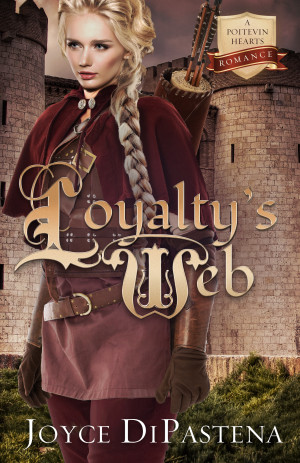 By Joyce DiPastena
Heléne de Laurant has not forgotten how the Earl of Gunthar destroyed her father’s castle during the king’s war with his sons. When someone tries to murder Gunthar and suspicion falls on her family and friends, she races against time, and dark secrets of the past, to unmask the would-be killer. But can she reveal the truth before it claims the life of the man she has unexpectedly learned to love? More
The blood of the barons of Poitou runs hot against the English crown. Can any of them be trusted?

Heléne de Laurant has not forgotten how the English Earl of Gunthar destroyed her father’s castle during King Henry II’s war with his sons. Apparently neither have her family and friends, for when someone tries to murder Gunthar, every sign points in their direction. Heléne realizes the only way to prove her loved ones’ innocence is by exposing the true assassin. But what if one of them is guilty? Can she forsake her bonds of love and loyalty to face the truth?

Gunthar views Heléne as at best naïve, at worst potentially complicit when she continues to deny the obvious. Her family betrayed the king once before in the county of Poitou. The attack on Gunthar’s life proves that one, if not all, of them are eager to exact revenge for the king’s humiliating defeat of the Poitevin rebels by murdering his most staunch supporter. Gunthar vows he will not return to England until he has uncovered and ruthlessly squashed this new threat to himself and his royal master.

As Heléne and Gunthar spar over the identity of the traitor, fierce determination gives way to mutual attraction. Heléne must race against time and dark secrets of the past to unmask the would-be killer before the kingdom plunges back into war. But even if she succeeds, will the love that grows between her and Gunthar be strong enough to break the webs of loyalty that threaten to keep them forever apart?

Poitevin Hearts, Book 1: Men and women living and loving amidst the political intrigues of medieval Poitou (a region of France once ruled by the Kings of England.)

The Poitevin Hearts romance series is linked together by recurring characters, but each title is written as a stand-alone novel. They can be read and enjoyed in any order.

Joyce DiPastena dreamed of green medieval forests while growing up in the dusty copper mining town of Kearny, Arizona. She filled her medieval hunger by reading the books of Thomas B. Costain (where she fell in love with King Henry II of England), and later by attending the University of Arizona where she graduated with a degree in history, specializing in the Middle Ages. The university was also where she completed her first full-length novel…set, of course, in medieval England. Later, her fascination with Henry II led her to expand her research horizons to the far reaches of his “Angevin Empire” in France, which became the setting of her first published novel, "Loyalty’s Web" (a 2007 Whitney Award Finalist).

When she’s not writing, Joyce loves to read, play the piano, and spend time with her sister and friends. A highlight of her year is attending the annual Arizona Renaissance Festival .

Joyce is a multi-published, multi-award winning author who specializes in sweet medieval romances heavily spiced with mystery and adventure. She lives with her two cats, Nyxie and Calypso, in Mesa, Arizona.

You have subscribed to alerts for Joyce DiPastena.

You have been added to Joyce DiPastena's favorite list.

You can also sign-up to receive email notifications whenever Joyce DiPastena releases a new book.