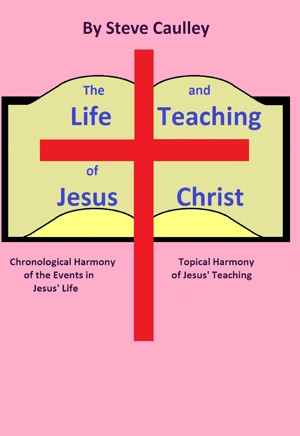 The Life and Teaching of Jesus Christ

By Steve Caulley
The Life and Teaching of Jesus Christ is a two-part harmony of Matthew, Mark, Luke and John. The first portion of the study harmonizes all of the events in Jesus life in chronological order. The second half is a synthesis of all of Jesus teaching around the theme of the Kingdom of God (the Kingdom's Messiah; membership in the Kingdom, the character of Kingdom citizens, etc). More
When we begin to study the life of our Lord Jesus, we are immediately struck by the challenge of dealing with four different but complimentary gospel accounts of Jesus' life and teaching. Each of these gospels was addressed to a different Christian community with special emphases that were especially relevant to that community. There is great value in studying each gospel alone, in order gain a clear understanding of the particular focus of the gospel writer.

It is also beneficial to look at all four gospel writers' record of Jesus' life put side by side, so that their different accounts can supplement each other. This approach is called a "harmony" of the gospels. The first known harmony was Tatian's Diatessaron (c AD 160). Many, many harmonies have been written over the centuries, but The Life and Teaching of Jesus Christ aims to be a harmony with a difference.

The first part of The Life and Teaching of Jesus Christ harmonizes the events of Jesus life in chronological order (the usual approach), but the second part of the study aims to harmonize Jesus' teachings topically around the theme of the Kingdom of God. There are chapters on Jesus' teaching on the Kingdom's Messiah, Kingdom Membership; the Character of a Kingdom Citizen; the nature of Kingdom Righteousness; the Ministry of a Kingdom Citizen; the Growth of the Kingdom and Opposition to it; and the Consummation of the Kingdom. Many links make navigating between the two halves of the book straightforward.

The text of the four gospels are not included in this book. The readers are left to choose the version (or even language) with which they are most comfortable. Instead, the chapters and verses for each section are given followed by a commentary on the text. Every paragraph of all four gospels is arranged within this structure and commented on by the author.

The Life and Teaching of Jesus Christ began as a textbook for a three term study of the Life of Christ at South African Bible Institute and so the gospel material has been grouped in 65 "lesson-sized" portions complete with questions covering both the content and application of the material to our daily lives. The arrangement should make this material especially useful for individual or group Bible study. A course guide is included for those who would like to see how the study operates as a college-level course. Because the study was prepared for students who use English as a second language, the vocabulary has been kept simple and down-to-earth.

The author is confident that The Life and Teaching of Jesus Christ will make a useful addition to every Christian's library and a valuable study for any group seeking to know the Lord Jesus better.

Steve Caulley has been working in southern Africa, training Christian leaders for 26 years. For the last 20 years he and his wife, Brenda, have lived and worked in Kimberley, South Africa, where Steve administers and teaches at South African Bible Institute, which he helped start in 1997. Steve and Brenda have four children, three in Oregon and one still in South Africa.

You have subscribed to alerts for Steve Caulley.

You have been added to Steve Caulley's favorite list.

You can also sign-up to receive email notifications whenever Steve Caulley releases a new book.