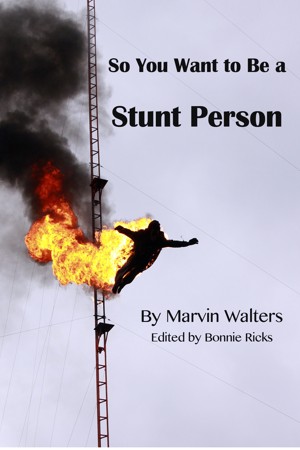 So You Want to Be a Stunt Person

By Marvin Walters
A beginner's guide to breaking into the stunt industry for both movies and television. More
If you’re looking for a “how to” book on doing stunts for TV, movies, music videos and the like, you’ve got the wrong book. In truth, I would never even consider writing such a book because writing such a book is – in my opinion – fool-hardy and dangerous… and the potential liability on the part of the author would be astronomical. There is just no safe way to tell someone how to do any stunt in a book! Instead, every person who aspires to become a stunt professional needs to find a mentor or teacher who will give him/her some invaluable hands-on training. But…

If you are looking for a book that will give you an honest evaluation of the stunt industry and what you need to do in order to prepare yourself to become not only a great stunt professional, but one who not only stays alive, but also does not get other people maimed or killed… well, then, you’ve found the right book.
Available ebook formats: epub mobi pdf rtf lrf pdb txt html
First 20% Sample: epub mobi (Kindle) lrf more Online Reader
pdb
Price: $9.99 USD
Buy Add to Library Give as a Gift
How gifting works
Create Widget
Tags: movies television motion pictures stunts stuntman stuntwoman movie stunts tv stunts
About Marvin Walters

I have been a Second Unit Action Director, Stunt Coordinator and Stuntman in the motion picture and television industries for more than 30 years. John Reed and I co-wrote the synopsis for a television series – “Fortune Dane” – starring Carl Weathers in 1985. I also co-founded the Black Stuntmen's Association of California in 1967, and founded the Coalition for Black Stuntmen and Women in 1972.

MGM Studios hired me in 1976 as an Affirmative Action Consultant. Working with my best friend, Ms. Jadie David, we were successful in increasing minority employment by locating underused minority problem areas. In one year, we increased MGM's minority status from 6 minority secretaries and 15 black janitors to over 161 minorities working in key areas throughout the studio. I used my position with MGM to set up meetings for Jennie Epper, President of the Stuntwomen’s Association, with the many different studios, giving these very skilled and talented women the opportunity to discuss the fact that, while many stunt doubles were used in films for stunts involving female actors, those doubles were actually men, dressed to appear as women. In addition, Jadie and I were successful in getting interviews for Minority Writers to discuss their issues as well, along with people in all the other crafts and unions.

In 1994, at the request of the minority stunt community, I returned to Hollywood, California and set up meetings with executives of the major motion picture studios, and Ken Orsatti, Executive Director of the Screen Actors Guild. After several meetings, which included minority stuntmen and women of all races, and a meeting with Walt Disney Executives, the television series, “Raven”, was created, along with several other programs utilizing minorities. Jadie and I formed the Alliance of Stunt Performers of Color, which became a sub-committee of the Screen Actors Guild, encouraging them to produce and promote an annual directory of all minority stunt players which includes not only their contact information, but also their photographs. The goals of the Alliance have been endorsed by the Alliance of Motion Picture and Television Producers.

In 1989 I was directing 2nd unit on “Keaton’s Cop”, shooting on location in Galveston, Texas. After seeing the living conditions of the African American children in that city, I made a decision to make Galveston my home, where I began working in a community service capacity in an effort to make a positive change by helping to shape and guide the lives of our children at risk. Since moving to Galveston, I authored another book, Awakening Giant, which is highly recommended for African American Youth and which will soon be available on Smashwords. I now live in Texas City with my wife, Diedra, and our daughter, Daria, and son, Marcellus. I manufactured and sold T-shirts and greeting cards until Hurricane Ike ended that career in September, 2008.

You have subscribed to Smashwords Alerts new release notifications for Marvin Walters.

You have been added to Marvin Walters's favorite list.

You can also sign-up to receive email notifications whenever Marvin Walters releases a new book.