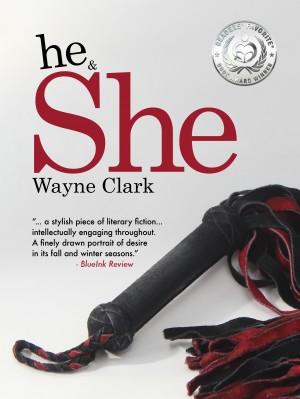 "There are multiple ways to view success in life, and Kit's journey through sexuality is not about preservation of the body, but of the soul... A remarkable investigation of a man attempting to save himself from stagnation." - IndieReader

"... a stylish piece of literary fiction... intellectually engaging throughout. A finely drawn portrait of desire in its fall and winter seasons."- BlueInk Review

"...All in all, this is a delectable novel about a man exploring his unknown sexual fantasies at the price of possibly losing his true self along the way."- Red City Review

Growing numb to life, to his on-and-off girlfriend of many years, his career, even Scotch, a man turns fifty. He is a translator who can no longer dream of translating beautiful works of fiction. He is an amateur musician who can no longer dream of expressing his life on a higher plane, without words. As he glares inside himself he sees little but his declining sexuality, his crumbling hold on life, a growing list of failed relationships, and a darkening well of loneliness.

Stumbling upon an image on the Internet one night, he suddenly hears cell doors sliding open. He stares at a young woman, in profile, beautiful, unblinking, regal. Instinctively he knows that by lingering on that image he will shatter a relationship that has kept him on the sane side of loneliness as surely as if he stepped in front of a speeding eighteen-wheeler. But desperate to feel alive again before time runs out, he knows he must see the stranger behind the pixels on his laptop screen.

Wayne Clark is a Montreal writer and author of the historical novel That Woman: Beating the odds in colonial New York (2017) and the international award-winning literary fiction novel he & She (2013). In addition to writing fiction he has worked as a journalist, copywriter and translator.

I thought that I would like this book based on the blurb. Well it turns out that my expectations fell flat on their ass. I don't know if it's me or what but the writing style and story went from having to dimension to being lifeless and boring. I'm seriously wondering how I made myself finish this book other than the fact that I've got need to finish the book syndrome instead of DNF the book. I wish the author luck with his writing in the future.

When introduced to our hero, he’s been so damaged by a stroke that he feels nothing but irritation and does nothing but masturbate. So, you know right from the start that the story will end badly, but still, you’ll be surprised at just how depressing things get. And I don’t think that the book is being presented for consumption properly. Anybody reading the summary would think that He & She is going to be uncomplicated smut – which is supposed to be fun. Fun, this ain’t.
Kit, or K., has no living family. He has a job as a translator, but he works from home and thus is not obliged to interact with other humans on a daily basis. He’s in a stagnant relationship with a woman who has never loved him. He’s an alcoholic, and he feels bored and old and numb.
A one night stand with an aggressive woman makes him confront his desire to be dominated. He’s convinced that exploring this desire will transform his humdrum life. He seeks out a dominatrix, and finds The Egyptian Princess.
The reader never really gets to know what makes her tick. She is, by turns, cruel & sadistic and warm & affectionate. She seems to have a genuine fondness for K., but she rebuffs him whenever he tries to get to personal. They begin a relationship separate from paid “sessions” and they hang out as friends. But then she cuts off all contact with him after she loses control and is intimate with him.
The story is a field day for an amateur psychologist. You wonder what happened to The Egyptian Princess to make her so afraid of (or is it revolted by?) physical affection. You wonder why K., an otherwise normal guy, craves violence. Or at least, I wondered. Maybe I’m not the correct audience for this novel. I didn’t understand K. Yet, I sympathized with him.
The writing is way better than you’ve got a right to expect from a self-published novel. K. is compelling, complex and his downfall is heart-wrenching. So, I’d recommend this if you’re looking for an emotionally draining novel, not so much if you’re just looking for something to wank to.

This novel, written by Wayne Clark, is about a man on the edge. His advancing age, his insecurities about himself ,and his sexual desires all compound together to cause him to act on an urge that he previously wouldn’t have imagined himself capable of going through with. Past the age of fifty, the main character is a translator who no longer takes joy in adapting written works into different languages, just as he no longer finds any happiness in his hobby as an amateur musician. As his world around him darkens, he explores remote websites on the Internet, eventually finding an image of a startlingly beautiful woman who may be the solution to his woes, even if that means she will have to dominate him in order to give his life a new meaning. Coming to terms with this new world of sex and desire, he has to contemplate if he has wanted to be in this kind of situation all along, as the dominatrix begins taking control of him, as ‘He & She’ embark on a dangerous ride.

You have subscribed to alerts for Wayne Clark.

You have been added to Wayne Clark's favorite list.

You can also sign-up to receive email notifications whenever Wayne Clark releases a new book.