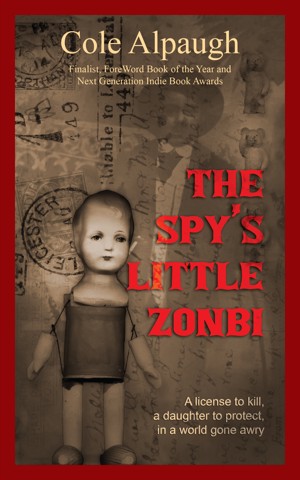 By Cole Alpaugh
Chase Allen never intended to be a killer, even for the good guys, but after he is recruited as a secret agent, terminating dictators and jihadists is all in a day’s work. He marries a dark beauty and they have a child, his “Little Zonbi,” who means everything to him. Now that his priorities have shifted, Chase strives for normalcy. But a spy doesn’t escape his past so easily. More
During a college sponsored aid program in Haiti, Chase Allen witnesses the slaughter of homeless boys. Unable to shake the haunting images with booze and bong hits, he decides to make something of his life by taking an unpaid newspaper internship. There he is recruited for a branch of the CIA whose agents pose as journalists in international hotspots. Chase begins his espionage career in Nicaragua, where his job is to position the country’s president in the gun sights of a distant sharpshooter during a press dinner. In Panama, he hunts for a deposed rogue dictator last seen in high heels and a bad wig. Success lands him a mission in Northwest Thailand, where he helps a young American Peace Corps volunteer caught up in a jihadist scheme to use bomb-laden bats. Back home in New Jersey, while monitoring a hapless band of wannabe Iranian terrorists, Chase meets a dark, intriguing woman. Marriage and fatherhood change his priorities, and he begins to worry about putting himself and his family in danger. With great reluctance he agrees to follow a former Austrian ski racer plotting a deadly strike on the Winter Olympics. It was Chase’s idealism that led him to spying, and that same quality will be his undoing. Faced with deceit beyond his wildest imaginings, he clings to the one person in his life who is good and true, his daughter Tylea, Little Zonbi.
Available ebook formats: epub mobi pdf rtf lrf pdb txt html
First 20% Sample: epub mobi (Kindle) lrf more Online Reader
pdb
Price: $6.95 USD
Buy Add to Library Give as a Gift
How gifting works
Create Widget
Tags: satire zombie iran nicaragua jihad haiti
About Cole Alpaugh

Cole Alpaugh began his newspaper career in the early ’80s at a daily paper on Maryland’s Eastern Shore, where he covered everything from bake sales to KKK meetings. He moved on to a paper in Massachusetts, specializing in feature essays. His stories on a Hispanic youth gang and the life of a Golden Gloves boxer won national awards. At his most recent newspaper job, a large daily in Central New Jersey, he was given the freedom to pursue more “true life” essays, including award-winning pieces on a traveling rodeo and an in-depth story on an emergency room doctor. The doctor’s story ended when the physician brought back to life an elderly woman who’d once been his children’s babysitter. The essay was nominated by Gannett News Service for a 1991 Pulitzer Prize. Cole also did work for two Manhattan-based news agencies, covering conflicts in Haiti, Panama, Nicaragua, El Salvador, and guerrilla raids conducted out of the refugee camps along the Thai/Cambodia boarder. His work has appeared in dozens of magazines, as well as most newspapers in America. Cole’s first novel, The Bear in a Muddy Tutu, was published by Camel Press, an imprint of Coffeetown Press, in 2011. Coming Soon from Coffeetown: Cole’s third novel, The Spy’s Little Zonbi. Cole is currently a freelance photographer and writer living in Northeast Pennsylvania, where he also coaches his daughter’s soccer team. You can find him online at www.colealpaugh.com.

Reviews of The Spy's Little Zonbi by Cole Alpaugh

You have subscribed to Smashwords Alerts new release notifications for Cole Alpaugh.

You have been added to Cole Alpaugh's favorite list.

You can also sign-up to receive email notifications whenever Cole Alpaugh releases a new book.