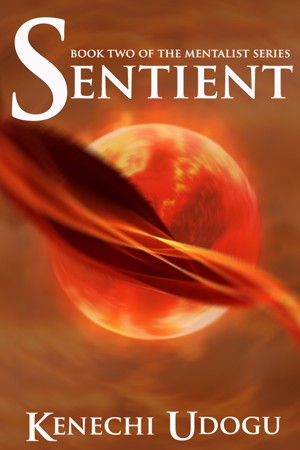 Kenechi lives in London and enjoys writing fantasy fiction and short stories (some of which she posts on her blog). She also hates the cold and hopes to one day figure out how to hibernate in winter.

About the Series: The Mentalist

Follow Gemma and Russ as they discover their connection in this young adult series of paranormal abilities, family secrets and forbidden love.

Also in Series: The Mentalist

Sentient brings back Gemma to Sandes, this time alone because her father is out there looking for clues and information about what it means to be a Sentient twin. With more powers to discover, a new threat and the intense attraction for Russ, is no easy to be a simple teenager girl.

This book shows us other sides of the characters and we finally get to know them a bit more. Gemma is still a very likeable character. She is very mature and focused for a girl of her age, however, she has moments of insecurity, doubt and fear which is understandable because she is just a young girl fighting alone with the unknown. Russ is her rock, she holds on to him when things get too rough but at the same time she does everything and anything to protect him. He is the perfect companion for her and just as Gemma he is very mature for his age.

The chemistry between the characters is very sweet and is good to explore their relationship. Gemma’s reservations towards Russ feelings are for me what make the story real. When you are a teenager, you question everything around you and I think the author makes a great work writing about this aspect of the characters.

The story moves fast and with a steady rhythm, there is a lot of action and surprises with every new chapter. Every new character is refreshing, some of them bring new powers and more information about a world we are still discovering.

The author creates a solid, enjoyable and complete world but she unravels it piece by piece. The mystery about this paranormal world is always present and you can never have enough.

Overall, Sentient is a great sequel. Full of the action and drama we love in a YA book, with romance and revelations. This book only makes us eager for more.

Gemma Green (Colt) is back in Sandes and nothing is the same. When we last saw our heroine, she had just escaped a threat that could've destroyed her family. But by luck or destiny, she survived only to face a more powerful foe.

Sentient is the next installment in The Mentalist Series by Kenechi Udogu. New characters arrive and new talents surface. In this book, Gemma seems emotionally drained by everything that has happened, however her abilities are gaining strength. Although Gemma is more subdued mentally this time around, outside forces push the plot forward.

Russ is as solid as ever and holds Gemma up where she's lacking. Laura is a quirky character that Gemma nor the reader are really sure of her intentions. She brings much needed relief to the growing tension of the plot. The background of The Mentalists is really beginning to grow here. Something big is brewing and it looks like it's headed toward Gemma whether she likes it or not. You'll have to read to find out what.

I recommend this for a good read. There are many mysteries posed and many mysteries made clear. I'm looking forward to the next installment to answer some big questions and see what Gemma is really capable of.

I received an advanced copy from the Author in exchange for an honest review and I must say I'm extremely happy I agreed to do so.
The second book in the Mentalist series does not disappoint and it only gets better from the first book, Aversion. It picks up almost immediately after the events that happened to our leading lady, Gemma and is filled with none stop action, new charters, plots and twists. I fell in love immediately with the new character Lauren and want to know more about the new (yet old, in the background) antagonists (or will they be protagonists in the future?) lead? by Anthony and his group of empaths.
I can not wait for the third installment of this novella. If the first one sucked you into the World of Gemma Colt. then this one will suck you in even more. A Great follow up to an already amazing series. Could not be happier with the direction of the book and am so glad Gemma if finally, (hopefully) letter her guard down with Russ.

(reviewed the day of purchase)
brittany perez reviewed on on Oct. 28, 2013

Sentient (Book Two Of The Mentalist Series)
Mastering her Progressive Empath abilities isn’t going as well as Gemma hoped. In fact, months after finding out what she really is, she still has no clue what this truly means. All she can do is wait to see if any new abilities will eventually manifest. Things aren’t going great with Russ either. Unsure of how to handle her Sentient Link with him, she tries to integrate herself in his busy social life but struggles to adjust to her new circumstances.

When she is plagued by recurring nightmares, Gemma realises things are changing and knows she has to do something, fast. The arrival of two sets of strangers in town, both offering the much needed assistance she needs to unearth her powers, escalates the situation even further. Gemma attempts to decipher whose intentions are genuine, but does she have enough time to figure out who has her best interest at heart?

Being familiar with the first book of the Sentient series, I did look forward to see where Kenechi Udogu would take is characters next and how they would evolve, especially Gemma, being new to her abilities and a father she never new walking in and opening her eyes to a life that would be and is more complicated than her own wildest imagination.

Before starting off on my readings of Sentient (Book Two Of The Mentalist Series), I first started my review and reading with the summary, a glance at what is to come and opening into a tale of a girl, continuing her journey trying to discover herself and Master her Abilities. With this Summary alone, we learn a young girl is going through a complicated journey trying to understand Abilities as an Empath, also has a Sentient Ability that links her to a boy named Russ. For people first drawn to this novel, there are just enough details in the summary to make the reader wonder what the abilities Gemma has been fated with and wonder how the story will play out. For any sci-fi, fictional reader just by reading the summary is enough to make you wonder. The only thing I would add a line or two in after “Unsure of how to handle her Sentient Link with him….”, giving new readers who may not have come across the first book yet what the link is without giving it completely away, just enough to give a new reader enough information to go on and understand.

Overall this summary will grab most readers attention, you find it will get even more attention from fans or those who know the series or fans of the genre. A reader familiar with the series will be more familiar with the terminology, but that’s also what draws you in the pure curiosity and wanting to know more and learn more.

A dilemma relayed between two characters, Russ and Gemma, and the intense feelings that are felt. Gemma wants to avoid Russ knowing she is an Averter, even with the knowledge of Russ wanting to touch her. For Gemma a dilemma occurred, recurring nightmares started that seemed all too much real. Gemma also had no one real to talk to; she could not talk to other Averters in her school because they didn’t like her kind….

Gemma’s journeys goes deeper into her own ability and her relationship with her dad, and her only friend, and close one at that Russ. We also get a deeper look into Gemmas life and the journey and tribulations as she travels as an Averter and Sentient.

You have subscribed to alerts for Kenechi Udogu.

You have been added to Kenechi Udogu's favorite list.

You can also sign-up to receive email notifications whenever Kenechi Udogu releases a new book.