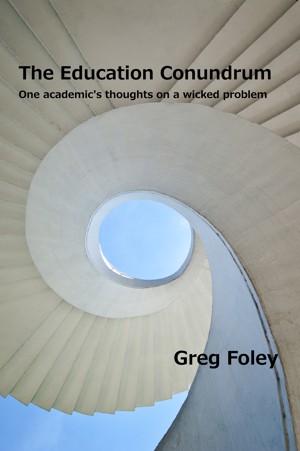 The Education Conundrum: One academic's thoughts on a wicked problem

By Greg Foley
The author, who has more than 25 years’ experience of teaching and researching within the Irish university system, casts a critical eye upon a variety of issues relating to education and its place in society; the organization of the education system; the philosophy of teaching and learning; the culture of academic science; PhD-level education and the vagaries of the academic world. More
Inspired by 25 years’ experience of working in the Irish university sector, this book is an exploration of all aspects of Irish education with a particular emphasis on third-level education. As well as dealing with issues relating to the very purpose of education, it deals with the organization of the education system and casts a critical eye on the teaching and learning ‘culture’. The book also focuses on the business and culture of science, especially the funding of science and provides insight into the vagaries of academic life including worries about managerialism and commercialism. A theme which runs through the book is the author’s perception that much of what we do today is based on the concept of plausibility. Whether it is the role of education in the economy or the way we structure our third level institutions or how we organise research around the notion of a ‘centre of excellence’, the underlying justification is usually one based on plausibility rather than real evidence. This leads to an alarming degree of groupthink within the education sector and a failure to address some of the truly important issues, many of which are as much societal as they are educational.
The book is about academic matters and it is written by an academic but it is not written in an academic style. It is structured as a large series of over one hundred short commentaries, divided among seven chapters, and written in a style that should be accessible not only to ‘insiders’ but also the general reader with an interest in any of the topics discussed in the book. The layout of the book will allow the busy reader to ‘dip in and out’ without having to commit to the whole book at any given time. The commentaries can be read by the reader in any order he or she chooses.
This book is ultimately the culmination of an increasing sense on the author’s part that he was being bombarded every day by ‘waffle’ and meaningless jargon: industry leaders talking about 21st century skills, policy-makers talking about the transformational effects of new technologies, politicians talking incessantly about that most meaningless of concepts, the ‘knowledge economy’, educators innovating for innovation’s sake and scientists with vested interests extolling the virtues of basic research. This book is a pragmatic reply to the jargon.
Available ebook formats: epub mobi pdf rtf lrf pdb txt html
First 20% Sample: epub mobi (Kindle) lrf more Online Reader
pdb
Price: $5.00 USD
Buy Add to Library Give as a Gift
How gifting works
Create Widget
Tags: teaching policy academia mathematics teaching approaches university life organisations research strategies policy analysis
About Greg Foley

Greg Foley is a chemical Engineer with BE and PhD degrees from University College Dublin and an MS degree from Cornell University. He has been a Lecturer in Bioprocess Engineering in the School of Biotechnology, Dublin City University since 1986. He was also a Newman Scholar in UCD from 1989 to 1992. He has published extensively in the chemical engineering literature, mainly in the area of membrane science and engineering and in 2013 he authored the textbook, "Membrane Filtration: A Problem Solving Approach with MATLAB", published by Cambridge University Press. He has supervised and examined numerous MSc and PhD students and has contributed to as many as twelve different modules at undergraduate level. He has been nominated for the DCU President’s Awards for Excellence in Teaching on three occasions. Since 2011, he has written on all matters relating to education, science and academia in his blog, educationandstuff.wordpress.com. He lives in Dublin with his wife, Julie Dowsett, and son Leo.

You have subscribed to alerts for Greg Foley.

You have been added to Greg Foley's favorite list.

You can also sign-up to receive email notifications whenever Greg Foley releases a new book.