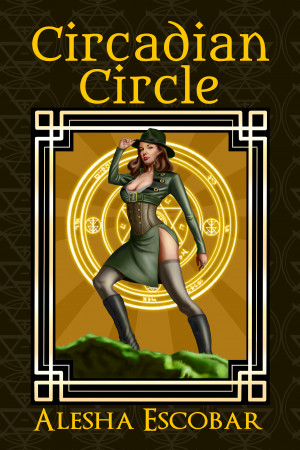 By Alesha Escobar
Rated 4.33/5 based on 3 reviews
Nazi warlock vampires, a rampaging Black Dragon, Vatican wizards, demonic corruption, and a Time Wizard gone mad. In this gripping, action-packed conclusion to The Gray Tower Trilogy, things go to hell in a hand basket -- and the world will never be the same. More
Isabella.

Nazi warlock vampires, a rampaging Black Dragon, Vatican wizards, demonic corruption, and a Time Wizard gone mad. In this gripping, action-packed conclusion to The Gray Tower Trilogy, things go to hell in a hand basket -- and the world will never be the same.

Alesha Escobar writes fantasy to support her chocolate habit. She enjoys everything from Tolkien and Dante to the Dresden Files and Hellblazer comics. She resides in California with her partner-in-crime, Luis Escobar, a 20-year art veteran on The Simpsons television show. Alesha is the author of The Gray Tower Trilogy, an action-packed supernatural spy thriller set in an alternate 1940's. The trilogy books have hit the Amazon bestsellers lists for Historical Fantasy and Mashups. You can find Alesha at her weekly blog, Fantasy, Mashups, & Mayhem, where she discusses fantasy and science fiction TV shows, movies and books, and celebrity gossip. She's just kidding about the celebrity gossip.

The best way to describe what this book (as well as the other two in The Gray Tower Trilogy) has taken me on.is an emotional roller coaster. Before I dig all these feelings out of the deepest darkest corners of my being, let me share what brought out some snapshots of happy.

1. Syntax stayed the course. There were very few mistakes to be seen in the .mobi copy I had for review.
2. Abstract covers remained in unity for the presentation of the trilogy.
3. There were actually a few characters that I got a chance to know, amidst all of the narrative, dialogue and action. One character I liked from the start was Gregory, despite him being distrusted by everyone. Another character I found enticing was Ammon. Yes, I know it is strange because he is the one the reader is supposed to hate, yet there was something cunning in the fact that he seemed always one step ahead. Finally, there’s Nikon: the more I discovered about her, the more I admired her “this is how I am, no apologies”. There is this resolve and tenacity in her that garnered my respect.
4. Although the author (upon initial reach out) stated that these works couldn’t actually stand alone, for me they actually could. This is a plus to the reader who wants to read something without being lost, or to one who has read one book and opts not to continue with the rest of the books. In other words, one doesn’t feel as if he has to finish the whole thing. There is enough back tracking to fill in the gaps, even if you were to start with this book or with book two (Dark Rift), as opposed to book one (Tower’s Alchemist).
5. The author has a great way of describing the setting prior to some of the action sequences.
6. There was a better balance in chapter lengths.

Opportunities for improvement:
1. In Circadian Circle, I was trying to figure out the time line. Was it in fact still World War II? The setting wasn’t as prominent this time around. Some form of time stamping would have helped developing side stories make sense.
2. Predictable conflict: Have you ever looked at a show and thought, “Hey they used that same trick three seasons ago!”, or wanted to look at a new episode of a program, only to discover that you’re watching a rerun? That is the best way to discover the crisis cycle that is Isabella.
3. When 'Circle' turns into comedy: Circadian Circle has been deemed fantasy fiction, action adventure, and/or even a mashup. Who knew that it was a comedy book too? Wait, I wasn’t supposed to be laughing, was I? Well, let’s think. There’s a heroine that the reader is supposed to get behind that uses her temper more than her brain to make decisions, then thinks she is getting over on the bad guys but playing right into their hands. On top of that, the dialogue Isabella has back and forth between people makes me shake my head in confusion and disdain. Plus, she is supposed to have over the top powers but instead of being trained earlier in this book (hell, even the last book), Isabella wants to get down to business without reading the instruction manual on how to do things properly but behaves like a brat when things don’t go her way.
4. Not enough growth to get behind the main character: Yes, Isabella may be the high and mighty Drifter but her overall disposition didn’t grow with her powers. Her stubbornness and inability to really adapt hindsight and truly blossom caused me to disengage from her story. It’s hard for me to get behind three long books worth of a person who is the main focus if the progress is lackluster or nonexistent. I’m not saying a hero doesn’t make mistakes but the greatest of heroes uses unfortunate circumstances to not only persevere but flourish into a better person and not meet those pitfalls again. You don’t continue to make errors; you go outside yourself and think of the whole as opposed to your own selfish needs and wants. That’s the meaning of sacrifice and it doesn’t always make one popular. I found Isabella to care way too much about popularity and wanting to cheat her way to being powerful rather than learning to be accountable, responsible, and diligent in her resolve.

Verdict: 2.75 out of 5 (rounding up to three because there's no way to do a three-quarters star)

If you want to go on an emotional roller coaster ranging from confusion, shock, shaking your head, and all things in between, leading to a very eerie pounding in your head and heart, then by all means, go for it.

As for me, I’m glad to get off this ride. I’ve never seen anything quite like this. There are not enough Circles of Protection, mental locks, talismans, heart binds, and Zaman’s Fires to invest any further.

I was blown away with the final installment. The ending left me with wondering if there will be a spin-off of sorts. I surely hope so. I want MORE!

I've enjoyed keeping up with the heroine Isabella and watching her grow throughout this trilogy. In Book Three she really gets her arms around her powers and her unique potential without losing her humanity. But to truly realize her destiny she has to make a deal with the Devil and make some heart-wrenching sacrifices. I especially liked the ending which hints at a whole new chapter in Isabella's life.

You have subscribed to alerts for Alesha Escobar.

You have been added to Alesha Escobar's favorite list.

You can also sign-up to receive email notifications whenever Alesha Escobar releases a new book.