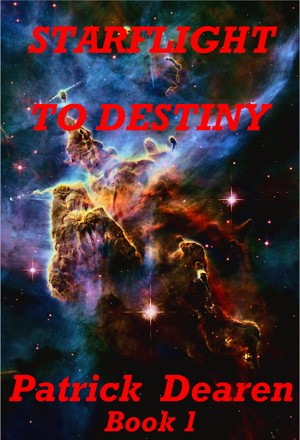 Together, Blake Sharrel and Rhonda Gregory embark on a starship quest to find the Leijan, an enigma that holds the fate of the cosmos. It’s an epic journey filled with peril: a crew of pirates ready to slit their throats, a planet where intruders are crucified upside down, and a chase across countless light years of unexplored space.

From one planet’s Valley of the Skull to another planet’s City of the Skull, and on to a derelict spacecraft orbiting a black world, it will be a "Starflight to Destiny."

A Spur Award-winning author of fourteen novels and ten nonfiction books, Patrick Dearen is a writer today because of his lifelong interest in Edgar Rice Burroughs and Leigh Brackett.
Dearen earned a journalism degree from The University of Texas in 1974 and won nine national and state awards as a reporter for two West Texas daily newspapers. His nonfiction books have centered on cowboy life and the Pecos and Devils rivers, essential background for his novel "The Big Drift," winner of the 2015 Spur Award for traditional western novel, presented by Western Writers of America. His novel "To Hell or the Pecos," a finalist for the Will Rogers Medallion Award, also grew out of his historical research. Another novel, "Perseverance," was inspired by his interest in hobo life during the Great Depression.
Three of Dearen’s books examine legends of lost treasure, which in turn inspired the story of a quest for a legendary interstellar power in his Starflight series, which consists of "Starflight to Destiny" and "Starflight to Eternity."
A ragtime pianist and backpacking enthusiast, Dearen has received awards from Western Writers of America, Western Fictioneers, Will Rogers Medallion Awards, San Antonio Conservation Society, West Texas Historical Association, and Permian Historical Society. He makes his home in Midland, Texas, with his wife Mary and their son Wesley.

trailer for "Starflight to Destiny" (book 1, Starflight series)
In book 1 of Patrick Dearen's Starflight series, two people embark on a starship quest for a mysterious power that may hold not only their fates, but the destiny of the entire cosmos.

You have subscribed to alerts for Patrick Dearen.

You have been added to Patrick Dearen's favorite list.

You can also sign-up to receive email notifications whenever Patrick Dearen releases a new book.