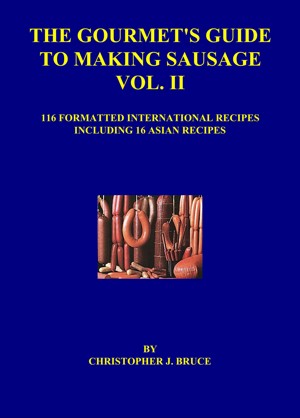 By Christopher Bruce
The Gourmet's Guide to Homemade Sausage Vol. II is the second volume detailing a further 111 recipes for making international sausages. Like Vol. I it also provides guidelines for the making of homemade sausages including sausage types, equipment, health, ingredients, additives, casings, production, methods and recipe records. More
Chris Bruce has made sausage as an amateur and professional for over 10 years but does not claim to have written any of the recipes in this book. In fact the recipes have been collected from every Tom, Dick and Harry he knows and a lot of people he doesn’t as well as from publications and the Internet. Some of them are exactly as provided, others have been changed so much from the original version that they would not be recognized by their original authors, some were gleaned from national meat boards and some from companies promoting sales of sausage ingredients, casings or equipment. However, all the recipes have been tried and tested and as far as I am aware, none of my friends or customers have ever suffered any ill effects from consuming any sausage the recipe for which is included in this collection.

Chris Bruce was born in England and educated in South Africa. After a long career in the construction industry in South Africa, Namibia, Hong Kong and the Philippines, Chris moved to Thailand in 2001. He built and equipped a sausage factory in Bangkok which was operated by his wife. Not being Thai, unable to speak the language, no longer a part of the construction “EXPAT NETWORK” due to the slump in the Asian construction industry, it was not long before he became somewhat bored with life. One way to alleviate the boredom was to write. Chris decided to use his knowledge of the sausage industry to write a book of sausage recipes. This was followed by a book of recipes for preparing meals using sausage and a book of liqueur making methods and recipes. After completing the three recipe books he encouraged friends from around the world to send him jokes and cartoons by email. This series of TAKE ME TO THE TOILET BOOKS (VOLS I to VII) is the result of the huge response he got. Chris makes no claim to have dreamt up the jokes, anecdotes and other amusing facts or stories featured in these volumes and in fact it is impossible, with very few exceptions, to say where the jokes originated. Two Thai cartoonists Kitti Meeboonnum and Wirat Sukcharoen provided the illustrations. One thing Chris did realize was that people do not have much time to read a little humour and the “Thunderbox”, as it used to be called, is the ideal place to do so. The internet, the source of much modern humor, is not normally accessible during visits to this most private of places and it is hoped that these “TOILET COMPANIONS” will add amusement to the otherwise idle moments spent in the “BOX”.

About the Series: The Gourmet's Guides to Making Sausage

Also in Series: The Gourmet's Guides to Making Sausage

You have subscribed to alerts for Christopher Bruce.

You have been added to Christopher Bruce's favorite list.

You can also sign-up to receive email notifications whenever Christopher Bruce releases a new book.