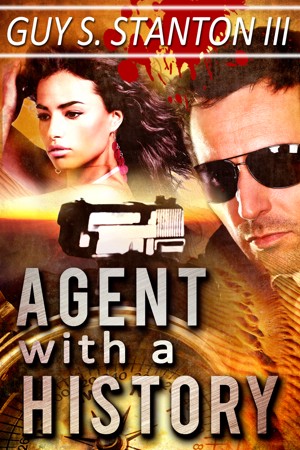 Agent with a History

By Guy S. Stanton III
Rated 4.29/5 based on 7 reviews
It’s been one long day for Lisa and her headache is living proof of it. Things always got crazy this time of the month, but this month was exceptional. She needed sleep bad and only hoped the nightmares that haunted her would leave her alone for at least one night. They don’t. She wakes up as usual screaming only to find out that her nightmare has just begun, because she’s not alone in her room. More
One man has been gruesomely tortured to death in a ritualistic killing. An entire police precinct has been reconstructed down to the smallest detail in an abandoned warehouse and a mysterious stranger known only as Flint seems to be the cause of it all. It’s a case that is fast turning into one big headache for Lisa Tauranto a detective for the NYPD, but it gets much worse when her past, that she’s tried so hard to bury, rises up to engulf her in its golden grip once again. Lisa is ripped from the existence that she so pain stakingly built for herself into a mixed up world of intrigue, where nothing is as it seems. It’s a fight to survive and to protect what she is sworn to, but will love conquer all? Will she betray her oath to be happy? Does she even have a choice anymore or does a several thousand year old mystery hold enough weight in treasure to drag her down with it? Everyone wants her dead, everyone that is but for one man who is the cause of all her upheaval in the first place. He’s an agent working for someone, but she doesn’t know who. She only hopes he’s as good as his kisses make her believe him to be.
Download: epub mobi (Kindle) pdf more Online Reader
rtf lrf pdb txt
Price: Free! USD
Add to Library
Create Widget
Tags: thriller suspense action adventure thriller adventure dystopian climate change romance genetic manipulation speculative post apocalyptic romance action adventure dystopian adventure dystopian teen ya young adult romance love conspiracy government
About Guy S. Stanton III

I’m a dreamer, a poet, a lover, a husband, a father, and a man of God. I’m inspired by what I’ve seen and what I’ve read, but what I create with my words is where I dream. I pray for inspiration, and I enjoy what I have written just as I hope that others will as well. I’m a quiet man on the outside, but writing has become the playground of my soul to express itself in the grandeur of the created worlds and tales that I have been fortunate enough to dream of. The best way to find out more about me is to read my books. I write from the heart and I express both my shortcomings and my triumphs. I like to think of my writing as 'Reality Fiction'. I tell it like I see it. Life is short and the troubles many, but with faith in Jesus Christ all things have become possible to me. I may write 'make believe', but I strive to live out what I write. I enjoy my work and I hope you do too. Have a blessed time reading my imaginative thoughts.
Sincerely, Guy III

Though the story line and writing is interesting, I am not able to keep my interest going. The primary reason is Rafferty. He is such a good man who is a well wisher of Lisa. But once the treasure related things starts, he was totally forgotten in the story. I think Lisa could have been more careful after seeing the tattoo in the cell. She could have informed Rafferty about her background. Somehow she was the reason behind Rafferty death. I am not able to digest the death of the homeless artist. after half of the story, I felt that the author doesn't like to keep the low profile characters alive, instead focusing of keeping the high profile characters alive.
"Men are valuable than all the wealth of the world.-SV".

Wow! It's captivating! Amazing! I love the book. The biblical history and how it eventually connected to Lisa gave me goosebumps. Flint is the perfect hero. All in all its a great and exciting book.

(review of free book)
Azeez Omowumi reviewed on July 6, 2015
(no rating)
Agent with a history.
Lisa is a detective presently working on a homicide. After an hectic day's job, she had a mysterious night visitor who fits perfectly into one of the culprit of the homicide. He was indeed lethal, he over powered her but spared her life leaving behind some food,a fixed door with a phone number and a warning to drop the case which is obvious she would not. Lisa finally finds out that the homicide was connected to her. Who is Lisa apart from being a detective ? Who is flint ? These are embeded in d novel. Sit back and enjoy the ride. For me it was a ride i have not recovered from !

Agent with a History

It’s been one long day for Lisa and her headache is living proof of it. Most of it she blamed on the full moon outside. Things always got crazy this time of the month, but this month was exceptional. She needed sleep bad and only hoped the nightmares that haunted her would leave her alone for at least one night. They don’t. She wakes up as usual screaming only to find out that her nightmare has just begun, because she’s not alone in her room.


Agent with a History was interesting and fast-paced. It was a quick read, and kept me on the edge of my seat.

The characters were well done. They had believable back stories that motivated their actions. The protagonists were lovable, yet still flawed, and the antagonists were purely evil, but I still pitied them.

The plot was mildly predictable, but I was still interested in seeing the story play out. It was a wonderful idea, but there were several plot points from the beginning that were never resolved. They were just there to get the character from point A to point B. I thought they could have been tied into the rest of the story better, or just left out. Other than that, I liked it.

There were some really neat and original elements to the book, such as 'The Queen's Dance' that Solomon composed for the Queen of Sheba. I thoroughly enjoyed the book, especially the elements of history woven through it.

Would I recommend it? Yes, to ages 15+
Would I let my kids read it? Yes, but there is some mildly mature material that I don't think young children should read
Would I read the other books in the series? Yes, I'm excited to find out more about the characters!

I received a copy of this book from the author in exchange for my honest review.

I've read the whole series and I think this is pretty good stuff. Actually that is an understatement. This series is amazing! Download, read and be caught in a whirlwind of adventure.

(review of free book)
yahooserious reviewed on May 4, 2014

The overall storyline is good, but there are a few elements that detract from the enjoyment:
- the middle of the book the looong section on the bible.
- incorrect word usage on ocassions (waist instead of waste).
- most notably the poor grammar that rises up and hits you between the eyes far too often. This really detracts from what could have been an overall enjoyable read and detracts several stars

“Agent With A History” by Guy Stanton III, was my first crime drama/thriller/suspense novel and I loved it! I was immediately pulled into the middle of the action from the very first page. A gruesome murder is committed, and exotic and stunning NYPD detective, Lisa Tauranto, is put on the case to find out who and why. Lisa is a no nonsense, hard nosed detective, who has a few skeletons in her closet that later come up for air. Through her quest to solve the case, Lisa is led to a mysterious and attractive man that goes by the name of “Flint”. He becomes her protector when her life is in danger and she has no choice but to trust him. But who is Flint and why does he seem to know so much about her, the murder, the people trying to kill her, her history and her knowledge of a hidden treasure? Is he really trying to keep her out of harm’s way, or is he the killer and is just out to get the fortune? We are left guessing as to who is behind all this but know that they will stop at nothing to get what they want. “Agent With A History” is full of intrigue, a touch of romance and Guy keeps the story moving forward with spy tingling action. I highly recommend this book and cannot wait to read the others in the “Agent” series.
(review of free book)

What an awesome read! This was a spellbinding journey of overcoming the bad, the pursuit of good, and the gray that lies between. Guy Stanton III weaves a tale of a heroine (Lisa, a detective in New York City) who is struggling to stay at the top of her game, while fighting the demons of her past. Enter a mysterious man (Flint) who is suspected to be evil but shows Lisa that not all that meets the eye is true. There are different sides of good, but only one kind of evil. Lisa had fought this evil all of her life, and now, she must fight till the end. Whether that is hers or the evil is yet to be said as you must read the book to find out!
A fantastic read for anyone!

You have subscribed to alerts for Guy S. Stanton III.

Would you like to favorite Guy S. Stanton III?

You have been added to Guy S. Stanton III's favorite list.