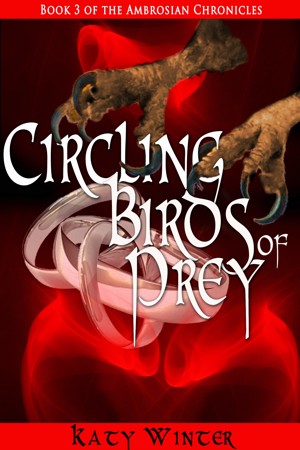 First 2% Sample: epub mobi (Kindle) lrf more Online Reader
pdb
Price: $4.99
Free! USD
Buy with coupon Use the code RD93H at checkout to get this book for free
(Offer good through Aug. 31, 2020 )
Have a better coupon?
Add to cart, then apply your coupon
Add to Library Give as a Gift
How gifting works
Create Widget
Tags: evolution telepathy mages empaths alternative worlds war against evil utopias and dystopias fate and destiny metamorphs
About Katy Winter

Having graduated from university, Katy Winter qualified as a teacher. Much of her subsequent career was spent teaching English Literature and History. She also taught night classes of tertiary students Classical Studies – the study of ancient Greek and Roman History, Art, and Literature. This love of the Ancient world was the spring-board which prompted her to turn her attention from teaching to writing. Katy spent nearly two years creating her epic work, the seven book “Ambrosian Chronicles”, publishing them between 2013 and 2015. They were followed, in 2017, by “Jepaul” and by “Sephone” in 2018.

Also in Series: The Ambrosian Chronicles

"Circling Birds of Prey" brings together some of the characters who parted company in the "Children of Ambros". The southern forces of evil march steadily north bent on destroying the children and their gathering allies. The "gifted" ones among the northerners begin to show signs of their evolving mental abilities. Is this magic? No. Although Katy Winter has characters known as mages they are not workers of magic ; rather they are beings who have evolved mental abilities and powers beyond those of normal mankind. They are not supermen (or women), but personages who choose to aid those who do not have the same gifts; and as is often the case, who are regarded with suspicion and fear by the non-gifted. Can the children overcome those fears, or will they be absorbed into and become part of the evil that threatens Ambros? Katy Winter will no doubt tell us as the drama plays out. Book 3 of the "Chronicles" maintains the pace of the first two books, but also shows flashes of deeper thought, especially in the areas of morality and ethics.