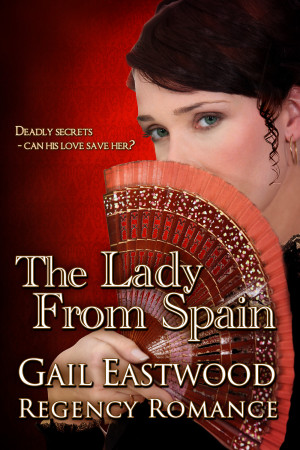 The Lady from Spain

“All her books have great characters, superb dialogue and exciting plots, and this book is no exception. The heroine is very sympathetic….and the hero is yummy!” –reader review

A native New Englander, Gail Eastwood spent almost 20 years as a journalist, theatre critic and PR consultant, among other jobs, before she finally sat down to write and sell her first novel, achieving her childhood dream. Published by Signet, that first book earned several honors including The Golden Leaf Award for Best Regency, 1994. Her other books have been up for numerous awards, and Gail was nominated for Romantic Times Magazine’s Career Achievement Award in the Regency category two years in a row.
Hailed by reviewers as “brilliantly versatile” and a “master at painting pictures of Regency life,” Gail was acclaimed for pushing her genre to new levels with the emotional depth and original plots in her books. She dropped out of the field for ten years, but now she’s back! She taught Writing the Romance for Brown University, and continues teaching writing and doing editorial coaching. A graduate of Case Western Reserve University, Gail lives in Rhode Island with her actor/attorney husband, two sons, and the family cat. She loves writing and researching, but stubbornly refuses to give up her interests in theatre, dance, costuming, the medieval period, and of course, the beach, even though she now has no time!

You have subscribed to alerts for Gail Eastwood.

You have been added to Gail Eastwood's favorite list.

You can also sign-up to receive email notifications whenever Gail Eastwood releases a new book.