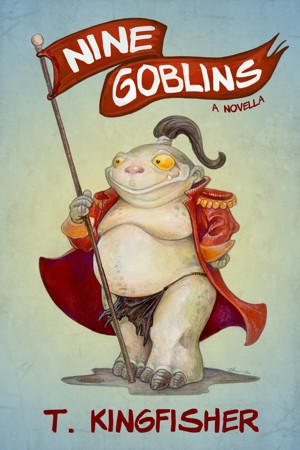 By T Kingfisher
Rated 5.00/5 based on 8 reviews
When a party of goblin warriors find themselves trapped behind enemy lines, it'll take more than whining (and a bemused Elven veterinarian) to get them home again.

A novella of low....very low...fantasy. More
Nessilka had been in any number of battles, and she couldn’t remember the first ten minutes of any of them.

She had a theory that if you could remember the first ten minutes, you’d never, ever charge at anybody again, so parts of your brain blotted them out.

The problem was that she couldn’t imagine why her brain would want her to continue charging at people, and this then led her to the theory that parts of her brain worked for the Goblin High Command, which she didn’t like at all.

Regardless, it was ten minutes into the battle, and she couldn’t remember what had just happened. There’d been a lot of yelling. Everyone yelled. No matter what species you were, elf, human, goblin, orc, random bystander, you yelled. There had been a lot of hitting things. Her shield was bent in four or five places, and her arms ached dreadfully.

Algol went by at high speed, shield raised, with Mishkin and Mushkin practically stepping on his heels. Mishkin had gotten a sword from somewhere, and was waving it dangerously close to Algol’s kidneys.
She had no idea how the battle was going, but she didn’t seem to be dead, so from her perspective, everything was really going rather well.
Unfortunately, Sergeant Nessilka had just seen a problem.

The problem stood on a little rise, just enough to lift him out of the battle proper. He looked human, and he wasn’t wearing armor, or carrying any weapons.

He was doing something with his hands, and there was a blueness in the air around him—not really a blue light, per se, but the world around him was turning shades of blue, like something behind a pane of cobalt glass. That wasn’t right. That was magic, that was.

A bolt of blueness streaked out from his open mouth, and hit a knot of goblins, who fell down.

T. Kingfisher lives in North Carolina and has won the Hugo and Mythopoeic Awards, under a different pen-name.

Review
Elizabeth McCoy reviewed on May 19, 2015

This book has been compared to Pratchett on various review sites. And I gotta say... yeah, they're right. It's not a send-up of Pratchett, or a pastiche, or anything so self-conscious. But the quirky turns of phrase, the characters that are drawn in broad strokes and still wind up feeling real and not caricatures, the world that sometimes goes just a little skew while people do their best to cope... And, yes, some grim and appalling situations that are handled dead-seriously by humorous characters...

Definitely comparable, and in all the good ways.

Other reviews are more detailed. Let me just be one of the greek chorus. It's good. It's not for (many or most) gradeschoolers. Buyyyyy eeeeeet.

The story starts off split between two sets of characters: Sergeant Nessilka and her goblin troops, and Sings-to-Trees and his various patients. Goblins have been at war with humans and elves for some time, mostly because they don't have much of a choice. When humans moved into goblin lands, the goblins, preferring to avoid conflict, moved out. Eventually, though, there were no other places they could move. A few disagreements and misunderstandings later, and the war began. The elves joined in as allies of the humans.

When Sergeant Nessilka and eight of her troops accidentally end up trapped behind enemy lines, her goal is to get everyone safely home. Although Sings-to-Trees is technically an enemy, he's a very unusual elf. He's more concerned with taking care of his animal patients than with the war, and he has fond memories of the goblins that used to live near his home. He might be able to help, but first he and the goblins have to deal with whatever is mysteriously emptying out nearby farmhouses and villages before it gets them too.

It took a while for the story to really get going. All the characters' paths didn't cross until about halfway through the novella. However, not once did I mentally start tapping my foot, waiting for something to happen. I was enjoying the characters, world, and writing too much for that.

The story's wry humor and quirky details reminded me a lot of Terry Pratchett's Discworld books. For example, on the one hand, Sings-to-Trees is a stereotypically gorgeous, nature-loving elf. On the other hand, when readers first meet him, he has his right arm up to the shoulder inside a pregnant unicorn's birth canal, is bruised from the contractions and being kicked by his ungrateful patient, and is splattered with unicorn crap. His home and his life were all arranged with his patients in mind, and his own people tended to steer clear of him, because they preferred nature that was clean and pretty.

Most of the goblins were fairly basic characters, with one identifying trait and not much else. Weasel stuttered and was good at catching small animals, Thumper was huge and liked thumping things (and people), Gloober always had his finger up his nose, etc. Taken as a group, they felt like a family. No nonsense, long-suffering Nessilka gave them direction and tried to keep them all together and safe. I liked Nessilka right away. Blanchett, who rarely spoke for himself and preferred to act as “interpreter” for his constant companion, a teddy bear, was another favorite of mine. His inability to function without his teddy bear was heartbreaking.

The ending was perhaps a little too light and fluffy, considering that there was still a war going on. However, after all that tension (creepy recently vacated farmhouse ::shudder::), all those bodies, and that tragically messed up “villain,” I appreciated it. I very much hope that the author plans to write more stories (or even novels?) set in this world. More exhausted, busy, pragmatic elven veterinarian would be especially nice.

An interesting and enjoyable mix of lighthearted and serious.

The goblins themselves will often have you chuckling at their various antics as well as how they see, and deal with, the world around them, while at the same time the situation they find themselves dealing with is a mix of grim and almost-tragic.

Excellent stuff. Reminiscent of Terry Pratchett, which I mean as a high compliment. I was grinning openly for a good percentage of the book.

This is a wonderful skewed look at the usual fantasy world; weird, smart, bold and very, very funny. The characters are dysfunctional, loveable, and extremely well drawn. I loved every word and will read it again and again.

(reviewed the day of purchase)
Jessica Cooper reviewed on Oct. 30, 2013

This is a wonderful story from a wonderful writer who looks at the world just slightly askew and has the gift to bring the reader into her vision. This is fantasy turned up until the knob falls off, and then gets jammed back on and thumped until it works.

The tropes of high fantasy are not so much skewered as run completely through, strung up, marinated and then deliciously prepared for the reader's enjoyment. Highly recommended.

A fun fantasy romp. More than once I was laughing out loud. It was a good story with interesting characters. I would love to read more of the goblins of the "whinin' niners".

You have subscribed to alerts for T Kingfisher.

You have been added to T Kingfisher's favorite list.

You can also sign-up to receive email notifications whenever T Kingfisher releases a new book.