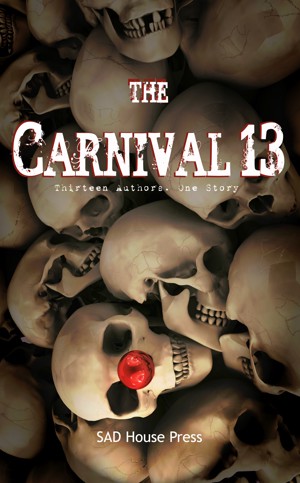 By Carnival 13 Collective
Rated 4.00/5 based on 1 review
Thirteen Authors. One Story.

A collective of 13 authors writing for charity!

“There is no hell, only Carnival.” This is one of the quotes in the book Carnival 13 and it’s a good description of what you can expect from this book. What could be more fun then going to a carnival? Brian doesn’t think its fun but his girlfriend Polly does. Brian is not happy and he gets even unhappier when they meet up with a group of friends at the Carnival and decide to explore together.

They soon find out that this is no ordinary carnival. Brian finds himself getting violently ill in a freak show and he doesn’t remember certain things. It gets worse when he imagines pushing one of his friends off a building and then sees a sadistic clown do the deed. The group starts dying one by one, they can’t escape the carnival and the freak show wants to keep Brian permanently as a serial killer clown.

Carnival 13 is a different kind of book, its a novel written by 13 horror authors with each one wrote one chapter and their goal is to shock you. Think of it like a group of horror authors sitting in a circle, one starts the story and then the next one continues it trying to be scarier then the previous author. Carnival 13 is a fun experiment in writing with all profits from the book going to Scares That Care.

I was excited when I heard about Carnival 13 because I love books about sideshows and carnivals and I like a lot of the authors involved in the project such as Julianne Snow, Armand Rosamilla, John Everson and Anne Michaud. All the authors in this book manage to deliver some scary moments using a classic horror setting of a traveling carnival. This book has a set of conjoined twins that are a little crazy, a perverted midget, a bearded lady, the fattest man on earth, killer clowns and deformed babies that are just as vicious as they look.

Carnival 13 is a fun creepy roller coaster and I found myself thinking that it would make a great cheesy horror film. Because you have 13 authors telling the story, I found it got a little confusing at times. There were things that didn’t get explained well and some of the characters were underdeveloped. If one author was writing the book it would have bothered me but I think the main point in this book was to scare you and try something that hasn’t been done before. Make no mistake about it, Carnival 13 delivers some great scary moments.

My favorite parts of this book were the scenes in the freak show when Polly and Brian see a mermaid and other oddities. I also liked in the beginning where a man is making fun of the freaks in the carnival and a clown comes up behind him and makes him sorry. I also liked how Brian debated on whether to listen to the clown that controls him or help his friends escape the carnival.

The absolute best part of the book was Terrence and Agnes trying to survive after a test of strength. The two are given a little backstory that makes you care about them and then they have to escape from some pretty frightening creatures. The Fattest Man On Earth will really make you cringe. If you don’t buy Carnival 13 for the horrifying moments get it because it’s a good experiment in fiction writing or because the profits go to a good cause.

You have subscribed to alerts for Carnival 13 Collective.

You have been added to Carnival 13 Collective's favorite list.

You can also sign-up to receive email notifications whenever Carnival 13 Collective releases a new book.