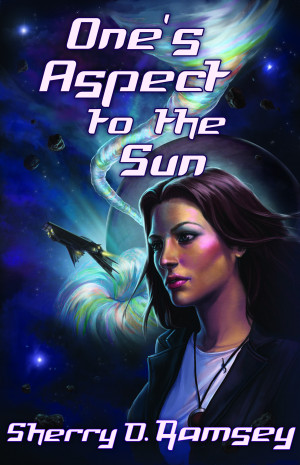 One's Aspect to the Sun

By Sherry D. Ramsey
Greedy corporations, nanotechnology, and family: a space opera with heart. More
Captain Luta Paixon of the far trader Tane Ikai needs to know why she looks like a woman in her thirties–even though she’s actually eighty-four. She isn’t the only one desperate for that information.

The explanation might lie with her geneticist mother, who disappeared over sixty years ago, but even if her mother is still alive, it’s proving to be no small task to track her down in the vast, wormhole-ridden expanse of Nearspace. With the ruthless PrimeCorp bent on obtaining Luta’s DNA at any cost, her ninety-year-old husband asking for one last favor, and her estranged daughter locking horns with her at every turn, Luta’s search for answers will take her to the furthest reaches of space–and deep inside her own heart.
Available ebook formats: epub mobi pdf rtf lrf pdb txt html
First 10% Sample: epub mobi (Kindle) lrf more Online Reader
pdb
Price: $6.99 USD
Buy Add to Library Give as a Gift
How gifting works
Create Widget
Tags: space opera nanotechnology immortality genetics female protagonist female captain
About Sherry D. Ramsey

Reviews of One's Aspect to the Sun by Sherry D. Ramsey

You have subscribed to Smashwords Alerts new release notifications for Sherry D. Ramsey.