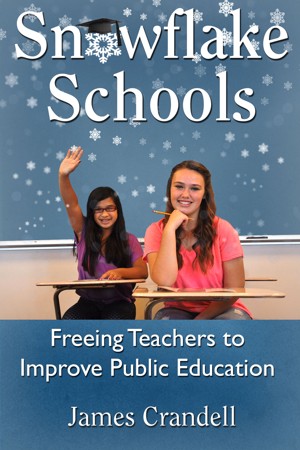 By James Crandell
Every school could be improved dramatically if the creativity of its teachers were unleashed. Snowflake Schools documents the impediments to that reality and shows how current practices can be modified to institute real reform. Culled from a 33-year teaching career, the ideas in this book could reverse the frustration and waste so prevalent in schools across the country. More
Despite billions spent and countless reforms instigated, American schools seem perpetually mired in mediocrity. To change that, we don’t need top-down initiatives or experts lecturing; we must recognize the uniqueness of every school and turn to those who know their classrooms best—teachers.

Snowflake Schools analyzes the current educational system, explains why recent efforts at reform were doomed to fail, and outlines procedures that would change the fundamental culture of our schools to one where the creativity and individuality of teachers could act as the driving force for positive change.

Unlike other books on school reform written by theorists who don’t understand how schools really work, Snowflake Schools comes from someone who worked within the system for thirty-three years and strongly believes in the ideals of public education. James Crandell not only taught thousands of students, but worked closely with hundreds of administrators, school board members, and parents throughout his career. If our schools are to improve, we have to allow teaching artists to help our children reach collectively developed standards using the unique talents each teacher inherently possesses and has spent years cultivating. Administrative edicts, federal programs, and state mandates have failed and will continue to waste precious resources unless they are designed to utilize the insights of millions of hard-working classroom teachers. Snowflake Schools provides the blueprints for making that happen.
Available ebook formats: epub mobi pdf rtf lrf pdb txt html
First 15% Sample: epub mobi (Kindle) lrf more Online Reader
pdb
Price: $2.99 USD
Buy Add to Library Give as a Gift
How gifting works
Create Widget
Tags: education teaching teachers school reform public education school change school policy teacher empowerment
About James Crandell

James Crandell started his teaching career in 1979 after graduating from Illinois State University with a Bachelor’s degree in English education, getting his Master’s in 1989 from Northern Illinois University in Counseling Education. He was hired for his first teaching position in the Language Arts Department of F.E. Peacock Junior High School in Itasca, Illinois, where he taught three levels of eighth-grade English from 1979-1987. Upon “graduating” from junior high in 1987, he moved to the English Department of Hinsdale South High School in Darien, Illinois, working there for twenty-five years until his retirement in 2012 after thirty-three total years of teaching. At Hinsdale South, he taught freshmen (honors, regular, and basic), sophomores (basic), juniors (regular and basic), and seniors (Advanced Placement, expository writing, world literature, science fiction, creative writing, radio broadcasting, and mass media), as well as working in the department’s Writing Lab as a tutor for individual students. Crandell worked as a teacher advocate through the Itasca Education Association and the Hinsdale High School Teachers Association which were affiliated with the Illinois Education Association and the National Education Association. His positions included association president in both locals, grievance chair, vice president, chief spokesperson and negotiator during nine contract negotiations, in addition to editing newsletters for the two associations. He currently writes a blog for the Darien Patch and lives in Downers Grove, Illinois, with his wife, two daughters, and a Wheaten terrier.

You have subscribed to alerts for James Crandell.

You have been added to James Crandell's favorite list.

You can also sign-up to receive email notifications whenever James Crandell releases a new book.