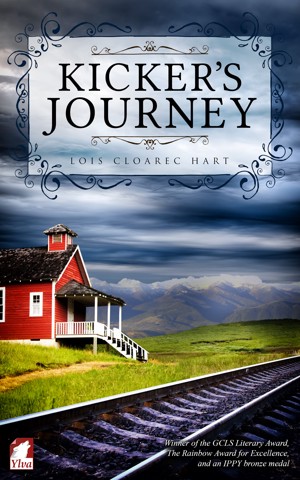 By Lois Cloarec Hart
Rated 4.00/5 based on 1 review
In 1899, Kicker works as a hostler and farrier at Grindleshire Academy for Young Ladies. When Kicker falls in love with teacher Madelyn, it radically alters the course of her tranquil life. More
In 1899, two women from very different backgrounds are about to embark on a journey together - one that will take them from the Old World to the New, from the 19th century into the 20th, and from the comfort and familiarity of England to the rigours of Western Canada, where challenges await at every turn.

The journey begins simply for Kicker Stuart when she leaves her home village to take employment as hostler and farrier at Grindleshire Academy for Young Ladies. But when Kicker falls in love with a teacher, Madelyn Bristow, it radically alters the course of her tranquil life.

Together, the lovers flee the brutality of Madelyn's father and the prejudices of upper crust England in search of freedom to live, and love, as they choose. A journey as much of the heart and soul as of the body, it will find the lovers struggling against the expectations of gender, the oppression of class, and even, at times, each other.

What they find at the end of their journey is not a new Eden, but a land of hope and opportunity that offers them the chance to live out their most cherished dream - a life together.
Available ebook formats: epub mobi pdf lrf html
First 20% Sample: epub mobi (Kindle) lrf Online Reader
Price: $9.99 USD
Buy Add to Library Give as a Gift
How gifting works
Create Widget
Tags: fiction romance lesbian historical
About Lois Cloarec Hart

Born and raised in British Columbia, Canada, Lois Cloarec Hart grew up as an avid reader but didn’t begin writing until much later in life. Several years after joining the Canadian Armed Forces, she received a degree in Honours History from Royal Military College and on graduation switched occupations from air traffic control to military intelligence. Having married a CAF fighter pilot while in college, Lois went on to spend another five years as an Intelligence Officer before leaving the military to care for her husband, who was ill with chronic progressive Multiple Sclerosis and passed away in 2001. She began writing while caring for her husband in his final years and had her first book, Coming Home, published in 2001. It was through that initial publishing process that Lois met the woman she would marry in April 2007. She now commutes annually between her northern home in Calgary and her wife’s southern home in Atlanta.

A solid 4 🌟 read with class featuring prominently. I agree with another reviewer that Madelyn could come across as coercive, and Kicker as naive, however I think this is the case in the beginning because of their class and the roles they had been brought up to play. It was good to see Kicker grow into herself in the harsh environment where her resilience and skill at manual work stands her in better stead than Madelyn's education and teaching experience.

A strong cast of varied and nuanced supporting characters add richness to the story including the Irish immigrant musician brothers who become Kicker's close friends, the MacDiarmid family who help the couple settle in a new country and the requisite villans, in this case Madelyn's monstrous, servant abusing father in the UK and a dangerous enemy in Canada.

This is the sort of book that is part adventure, part love story, and it requires a commitment to patient character building and dialogue. There are several dramatic and life altering events that remind how fragile life was at the turn of the century. All combine to reward with an engrossing and satisfying read.

You have subscribed to Smashwords Alerts new release notifications for Lois Cloarec Hart.

You have been added to Lois Cloarec Hart's favorite list.

You can also sign-up to receive email notifications whenever Lois Cloarec Hart releases a new book.