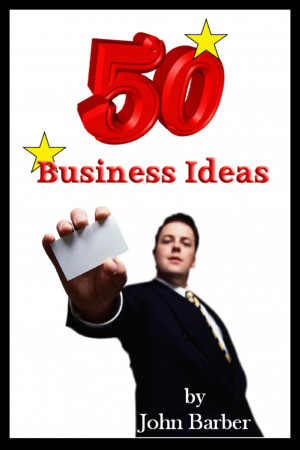 By John Barber
All the business ideas featured are real stories pulled from real news items during the 1980’s. Some started with little or no capital; only a few needed some large investment. What they have in common is that they are all proper businesses operated by real people. Most are considered small businesses and many can be run from home. More
Fifty Business Ideas is intended for anyone looking for inspiration to kick start a business opportunity. It is hoped that it will bring out the entrepreneurial spirit in the reader. This book contains stories of real businesses that were established in the1980’s and went on to make money. There are a few failures amongst them which may also help to inspire an improved version and some very risky ventures that could even succeed with some fine tuning.

All the ideas featured are real stories pulled from real news items during the 1980’s. Some started with little or no capital; only a few needed some large investment. What they have in common is that they are all proper businesses operated by real people. Most are considered small businesses and many can be run from home.

There is an element of fun in this book. Some ideas are quite bizarre but they did work. Many of the ideas here will not be found in the usual ‘how to start a successful business’ book because they are very unconventional.

Fifty Business Ideas (actually there are 51) are arranged under the following chapter headings: Leisure, Business to Business, Social Networking, Customer Research, Working with Animals, Inventions, Re-Cycling and an idea or two to proceed with extreme caution.

One or two could be construed as illegal or possibly immoral depending on your standpoint but clear notice is given on these case studies.

There is no guarantee that any of these will make a fortune. But they did succeed for at least one entrepreneur. There are no step by step guidelines, no hand holding; that is not the reason for this book. Sometimes all it takes is a different perspective on life to kick start a new career, or a flash of inspiration which hopefully will be found here