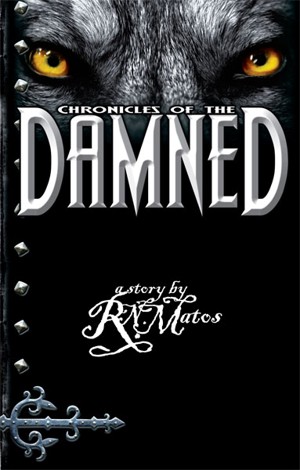 Chronicles of the Damned

Bruno Maximus Casta struggles to distance himself from the horrors of the life he was cast into and the war that has raged for thousands of years. One night a mysterious woman enters his gallery stirring up memories that threaten to bring the war between the Legion, the Canis and the humans to his door step. Harrowing events unfold on the road to discovering the Chronicles of the Damned.

Writing about one self is always a difficult task. It is so easy to make up things for stories, but telling a complete stranger the truth about one's life is a whole other thing. One doesn't want to come off braggadocios nor embellish too much on the uninteresting. At the same time it is a rare opportunity that one has a chance to tell ones story. So, I shall do my best to tell a good story about myself.

I was born in Havana, Cuba at a time when Castro had solidified his control of the island and those who knew better were trying to get out. My father was an anti-revolutionary, a Christian and a distant relative of one of Castro's cohorts who had fallen out of favor, Huber Matos. None of which promised a good future in the new world order of Cuban existence under Marxist-Leninist rule. We left the island when I was four or five years old and from the moment I saw a Woolworth I swore I'd never go back. My father managed to get a job working for the Chase Manhattan, but shortly after that he decided to become a Baptist Minister and he moved the family to Texas. It was a shock to the cultural system. New York City was just so different from San Antonio Texas in 1978. The adjustment was difficult. It was the first time I would hear the N-word, spic, wetback and where Cuban meant I was just another Mexican. I adjusted. I learned to love the state of Texas because with all its faults there is an unmatched sense of freedom I have felt no where else. My senior year in High School my parents moved to Jacksonville, Florida and went through another cultural adjustment. I was enrolled in Nathan Bedford Forrest High School and was exposed to open interracial relationships for the first time. I always found it ironic that in a High School named after one of the founding members of the infamous Klu Klux Klan, an African- American young man with dreadlocks wearing a Jamaican flag on his shirt was walking hand in hand with a blond blue eyed girl wearing a Red Raider t-shirt. Still, these experiences were instrumental in shaping my views on politics, religion, society and economics. I Joined the Army and enlisted with the Airborne Infantry. I was stationed in Alaska for three years with "Charlie Airborne." I left the military in 1989 and enrolled at the International Fine Arts College in Miami - now known as Miami College of Art and Design. I earned an Associates degree in Commercial Arts. I then enrolled at Florida International University. I started illustrating for two small independent comic book companies and then later got my first real job working for a software company designing their packaging. In my graphic design career I've worked for Rum companies and freelanced for high fashion models. Currently, I live in Miami, Florida. I'm married to a beautiful woman who is half Honduran, half Puerto Rican, was born in New York and was raised in North Carolina. How's that for diversity? I have a beautiful nine year old daughter as a result of who we now have a zoo in the house including four dogs, ten geckos and three snakes. I enjoy photography, hiking the paved trails of the Everglades with my family, playing video games and drawing. I am a huge Star Wars fan. My favorite drink is the Mojito. I can't stand whiskey, scotch or tequila, but I do enjoy Patron. I drink beer with friends and enjoy taking their money in a game of Texas Hold'em. I never imagined I would ever write a book, much less a 500 page novel. I have always been a good storyteller, but preferred to express myself visually through illustration and painting. My wife, who has always been an avid reader, urged me to turn my story into a series of novels. I started researching and writing Chronicles of the Damned in 2000 and self-published the first book in December of 2008. I expect it will be a best seller one day and I hope it will become a great movie. This might sound pretentious, but one has to aim high when shooting at such a distant target.

You have subscribed to alerts for R. N. Matos.

You have been added to R. N. Matos's favorite list.

You can also sign-up to receive email notifications whenever R. N. Matos releases a new book.