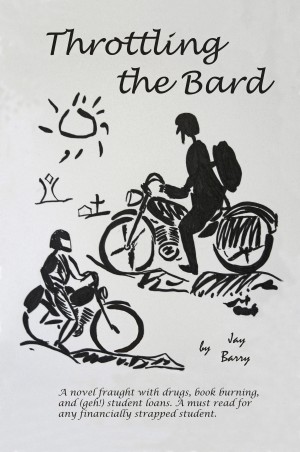 Throttling the Bard, a modern tale of motorcycle road trip mayhem, has been described as Don Quixote meets Easy Rider. Hilarity ensues when an antiquated English professor and his grad student travel the state of Nevada encountering cults, drugs, and the Burning Man Arts Festival. More
Within the seemingly pristine halls of academia lurks the seedy underbelly of financial aid and an English professor in Las Vegas who has bilked that system for many years in order to redistribute its wealth to students of a lower socioeconomic class. When the Great Basin Student Loan Corporation discovers Dr. Don Vendicarsi’s illegal means of obtaining student loans, they demand his presence at their Reno office. Fearing that his teaching career will end prematurely, Vendicarsi must ride to Reno to face off against the inscrutable loan board. Quentin Mann (a grad student whose self-described persona, Tall, Dark, and Handsome, comes out through his internal narrations) goes along for the ride, thinking that the trip is the perfect opportunity to force dissertation comments from Dr. Vendicarsi. Together they embark on a quixotic motorcycle road trip across Nevada where they encounter everyday Americana: a book burning cult, drugs, captivating women, and the Burning Man arts festival. Harried by the repeated phone calls from Great Basin and inspired by a demolitions expert at Burning Man, Vendicarsi ponders the ultimate definition of a teacher’s sacrifice by eradicating all records of student loan debt, while Quentin realizes that spending borrowed money on yet another degree is not what he needs to become a recognized author.

Jay Barry took to the creative writing urge as a child when he went door to door, selling comic books he wrote and illustrated. After a brief hiatus, he picked up writing in high school, completing many children's stories. One of these actually got an honorable mention in a contest. Then they spelled "Jay" wrong on the award. Sheesh. English majors can be jerks. During college, he took advantage of student loans, trekking through the Old World and writing travelogues and is still paying off those student loans.

He got the idea for Throttling the Bard at an Andrew Bird concert when he sung "Case in Point." Since then the idea grew and here is the finished product. If you have any idea of how to get a copy to Mr. Bird, please let me know.

"Why comedy?" Jay asked himself for no particular reason other than to enlighten his curious fans who just might still be reading this inane blurb. "Because I like it when people laugh at something I've said. It puts me at ease."

You have subscribed to alerts for Jay Barry.

You have been added to Jay Barry's favorite list.

You can also sign-up to receive email notifications whenever Jay Barry releases a new book.