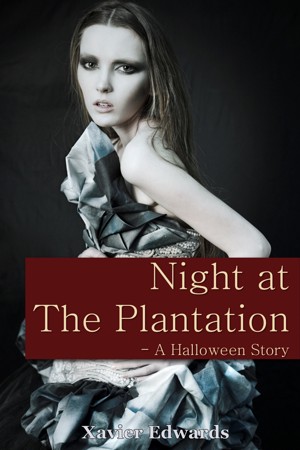 Night at The Plantation - A Halloween Story

Rated 3.00/5 based on 1 reviews
The hottest ticket in town is an invitation to The Plantation for the annual Halloween event. Lauren is lucky enough to be invited, only to find that things aren’t as they seem, and definitely not as she expected.

Her plan to find a man a the party is thrown into disarray when she encounters two brothers, who share a terrible secret between them — the secret of The Plantation itself.

Xavier Edwards (it might be his real name, no one is really sure) has spent his life surrounded by women, and writing. Growing up in rural Australia before the age of the Internet and cable television, there was no better refuge than in books. Any and all genres were absorbed as he and his three sisters grew up far from the hectic pace of the big smoke. The wide expanse of open country and natural beauty have carried across to his writing, forming evocative backdrops to the sensual dance taking place in his stories.

After leaving school, Xavier joined the military and has served with honour in the Air Force, from leading brave men and women into combat to searching for, and finding, people lost at sea. Joining him on this journey has been his wife, three daughters, and two cats.

Behind it all, Xavier continued to write. Freelance journalism proved lucrative and gave him his first taste of a readership that found his writing engaging and evocative. The imagery that continued to dance through his mind, would not suit this audience and when he did write it down and gave it to a small, trusted circle of readers, it had amazing results. Quite by accident, he had discovered a knack for Erotica.

Atmospheric and well-paced. Didn't necessarily make a lot of sense, and I was frustrated by the protagonist's slowness at putting things together, as well as a major plot question the story leaves unresolved. But I would read more from Xavier Edwards.

You have subscribed to alerts for Xavier Edwards.

You have been added to Xavier Edwards's favorite list.

You can also sign-up to receive email notifications whenever Xavier Edwards releases a new book.