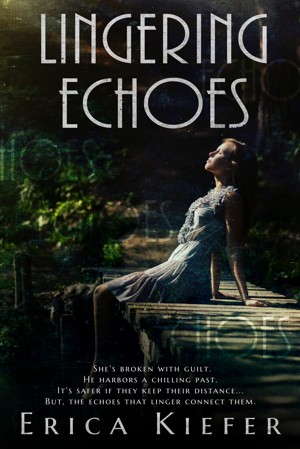 By Erica Kiefer
Rated 5.00/5 based on 1 review
Returning to Hidden Pines is the last thing Allie Collins wants. The family cabin where she spent her youthful summers now holds a dark memory. Then Allie meets Damien, a local rebel with secrets of his own. By the time Allie unearths the mystery of Damien’s past, she realizes how intricately they are connected. Now, she is caught in a dangerous battle that threatens her life and those she loves. More
“You can’t change the past… no matter how much you want to.”

If only Allie Collins could go back to that tragic day one year ago, perhaps she could escape the guilt that haunts her. In reality, there was no altering her cousin’s death or the role she played.

Then she meets Damien Michaels, a dark-haired stranger on a dirt bike, who seems to watch Allie and know more about her than he should. Veiling his own secrets, including a mysterious scar and tattoo, Allie knows she shouldn’t trust him—especially as she digs up a past Damien desperately wants to forget. She also doesn’t believe in summer romances, yet she finds her attraction to him growing beyond his striking grey eyes. Too late, Allie discovers he is hiding a dark past that is far from over, endangering her life and those she loves.
Available ebook formats: epub mobi pdf rtf lrf pdb txt html
Price: $2.99 USD
Buy Add to Library Give as a Gift
How gifting works
Create Widget
Tags: love story contemporary romance young adult romance complicated relationship teen love story romantic suspence complicated relationships complicated love story new adult contemporary romance clean teen publishing hidden pines clean teen publishing erica kiefer erica keifer
About Erica Kiefer

Erica Kiefer was born on Christmas Eve in Southern California to an American father whose ancestors arrived from Europe during colonial times and a Thai mother who moved to the US during high school. Adding to her rich and varied heritage, Erica grew up living abroad in Asia, including Taiwan, Fiji, Thailand and Indonesia. She gained a great respect for the beautiful mosaic of cultures found in various parts of the world. After graduating from International School Bangkok, she attended Brigham Young University in Utah, where she earned a degree in Recreation Therapy. Her career as a Recreation Therapist has allowed her to work with at-risk youth since 2007.

Erica made the best decision of her life by marrying her husband in 2005 and is currently a mother of three, one of whom awaits her in heaven. Erica also loves singing, reading, writing, and satisfying her sweet-tooth with chocolate-chip cookies. Playing collegiate rugby was one of the most memorable experiences of her life, thus far.

I read a lot of YA novels and it was so refreshing to read Lingering Echoes. As the relationship builds between Allie and Damien, the author focused more on the drama between these two as it intensified and the tensions that pulled these two together instead of building a steamy novel centered on their romance. Allie and Damien do have some tender moments in this book but the book was not solely focused on their romance. There were friendship issues, family issues, lots of drama, and many layers of this novel. Allie has her wall up for an incident that happened in the past and Damien has some ghosts in his closet that Allie soon uncovers. Perhaps these two are really not that different from one another. It all begins when Allie reluctantly shows up at Hidden Pines to start a two week vacation with her father. Tensions are already in the air. It’s the location of the destination that has Allie on edge and her step-brother isn’t making things any easier. As Damien enters the picture, Allie doesn’t know what to make of him but with his striking gray eyes and his dark hair. He’s a distraction from being with her family and what a distraction he ends up being. I loved the way that the author twisted Damien into the story, signs of a true master of storytelling.

You have subscribed to alerts for Erica Kiefer.

You have been added to Erica Kiefer's favorite list.

You can also sign-up to receive email notifications whenever Erica Kiefer releases a new book.