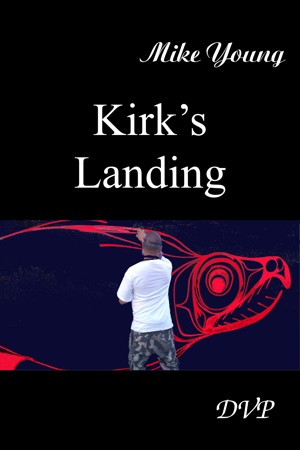 By Mike Young
Rated 4.00/5 based on 1 review
Big city undercover cop, with the power of invisibility, gets his cover blown in Toronto and is sent to head up a RCMP detachment in a supposedly quiet small town in Manitoba near a First Nations reserve. He soon finds that Kirk’s Landing has a lot more going on under the surface that he had anticipated, including corruption at the mill, murder, and an evil spirit. More
Dave, an undercover cop, is busted when his cloaking power fails in the middle of a biker gang meeting. Forced to hide out as detachment commander in Kirk's Landing, a small Manitoba town, his only goal is to continue as a loner and lay low for a year. He learns it's hard to stay a loner in a small town, though, especially with everyone, including his new First Nation's friends, eager to meet him and enlist his help with their version of the local issues. Dave finds his detective instincts pulling him into an unsolved disappearance, corruption in the local high tech paper mill, and pollution of the local lakes and rivers. When Dave tries to use his invisibility to help him in his investigations he discovers there are darker forces at work-forces that are now targeting him, changing him. It's now up to his friends to decide if he can be saved in time.
Available ebook formats: epub mobi pdf rtf lrf pdb txt html
First 15% Sample: epub mobi (Kindle) lrf more Online Reader
pdb
Price: $2.99 USD
Buy Add to Library Give as a Gift
How gifting works
Create Widget
Tags: police canada rcmp rural first nations northern graffiti spirit possession undercover cop manitoba
About Mike Young

Mike was born and raised in Kirkland Lake, a small northern mining town with a nearby First Nations reserve.
He grew up with a love of the north, even in the midst of winter, exploring the surrounding woods with his friends, and his grandfather. He moved down south in his 20's to follow a career in quality management, but his real pleasure was still heading outside the city, with canoe and tent. While in Toronto he also developed an interest in back-alley murals, in artistic graffiti, and worked with some police there that saw its potential as a community building exercise.
He'd always been a voracious reader, so several years into retirement he decided to try writing, and hasn't stopped since. This is his first book, but he has several more drafts waiting in the wings.

Kirk's Landing introduces readers to a small community in Northern Canada, fraught with hidden issues that are further complicated by Dave's own reluctance to face his Native heritage. I was hooked from the first page and found the story fascinating for it took me to a place I've never been -- a small community in Manitoba, where the winters are beyond cold, quite capable of dropping to minus 40C.

The story begins dramatically and keeps the reader wondering how conflicts can be resolved. I also enjoyed the authentic relationships between our hero and a potential lady friend, and also for the very real picture given of small town conflicts, especially when folks in power have something to hide.

Kirk's Landing was fun to read. The people, the beautiful yet harsh back country, and some of the issues between predominantly white and predominantly native cultures stay with me. A fine first book to this planned series!

You have subscribed to alerts for Mike Young.

You have been added to Mike Young's favorite list.

You can also sign-up to receive email notifications whenever Mike Young releases a new book.