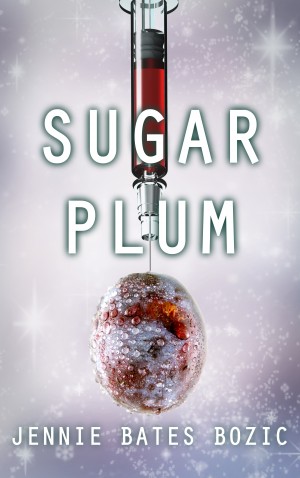 It’s the year 2081 and the USA hasn’t been united for five years. Now it’s divided into three bitterly feuding sections - the West, the East, and the Mids, and thousands of families have been separated by the conflict. In order to figure out how spies are crossing from the right coast, the West is targeting caravans of families crossing the Mids illegally. Trouble is, the crossers are hard to track, and that’s where Sugar comes in.

Every week, she and hundreds of others like her are packaged as Christmas tree ornaments and “donated” to poor children. If they’re lucky, they’ll end up with a crosser kid and dig up valuable information about the clandestine caravans while their wings serve as a tracking device. If not, they fly back to the Candy Factory for reassignment. Wash, Rinse, Repeat until they’ve served enough missions to earn their freedom.

When Sugar is placed with a crosser kid named Clara, she quickly discovers that the conflict is more complicated than she thought. Clara’s uncle and his family were assassinated and now her parents are running for their lives. Every second that Sugar remains with the family, she puts them in danger. If she leaves, she’ll surely be caught and lose any chance at freedom. If she stays, she might lose everything.
Available ebook formats: epub mobi pdf rtf lrf pdb txt html
First 10% Sample: epub mobi (Kindle) lrf more Online Reader
pdb
Price: $0.99 USD
Buy Add to Library Give as a Gift
How gifting works
Create Widget
Tags: young adult teen adventure teen science fiction young adult action adventure young aduld the nutcracker young adult action fiction young adult adventure fantasy free christmas fiction
About Jennie Bates Bozic

I'm a visual effects artist for film and television by day, and at night I don my author cape and pen stories for the YA crowd. I love a good fairy tale, especially if there's a creepy twist, so that's what I write.

I met my husband in the World of Warcraft and we live in Los Angeles with our cat. We spend our time playing video games, reading, hiking, sweeping up cat hair, and cursing the terrible traffic.

I have a bachelor's degree in Religion and Philosophy from Hillsdale College, and some of my past jobs have included: swimming lessons teacher, lifeguard, furniture salesperson, barista, and loan officer. I was especially terrible at the loan officer bit and that's what prompted me to make a major change and go off to Canada to get a diploma in 3D Animation and Visual Effects. After that, I moved to Los Angeles by myself and roomed with two crazy sisters I found on Craigslist. But that's another tale.

Thanks so much for stopping by and I hope you enjoy my books!

I really enjoyed Damselfly, so imagine my excitement when I stumbled across a novelette set at the same time in the same world with the same types of little people. I'll give you a hint: I was totally stoked. I was so excited to meet another six-inch tall girl and learn more about Lina's world.

In Damselfly, we see little to none of the USA. A few glimpses of Hawaii and that's about it. So I thought it was really interesting that, while Lina thinks she's the only girl of her type, the US has created these little fairies to use as spies. It kind of gives a whole new depth to fairies and makes the traditional ornaments seen around Christmas totally creepy, but (apart from shrinking people down to six inches and giving them wings), actually sounds like something that isn't too far-fetched. It's kind of scary to think about, but it's not like we're not all being watched all the time anyway. Just... not by fairies.

Sugar is a really interesting character, and I'm really excited that this is just her introduction. I felt like this story kind of just ended and didn't resolve much of anything, but I'm honestly ok with that because I found out there's going to be a sequel to Damselfly and Sugar will be reintroduced in it. So hooray! I enjoyed that this story was set in the same world, but in a totally different location and focused on a completely different character. I can't wait to see how Sugar and Lina meet, and what adventures they will have.

I would definitely recommend this story to anyone who read Damselfly, since it expands upon the world created there. I would also recommend the series to anyone who loves sci fi and fairy tale retellings. It's a great series, and I can't wait to see where it goes from here. 3/5.

Sugar Plum is a fairy with beautiful purple wings and only six inches tall. Every year at Christmas Sugar and hundreds of other fairies like her are given away as Christmas tree ornaments to poor children and most of the time these children are crossers. Crossers are families who are trying to cross the Mids illegally. The US has been divided into three sections, the West, the East and the Mids.

Sugar is given to a little girl named Clara who is told not to open her gift until Christmas. She is told if she waits until Christmas that her little fairy will then magically turn into a real girl. Clara wants so badly to open her present before Christmas but she doesn't because she believes that her little fairy might not turn into a real girl if she opens her before Christmas so therefore she waits.

I read Damselfly before reading Sugar Plum and really loved it. So then I just had to read Sugar Plum. I wanted to find out more about the little humans. I have so much loved reading about the six inch humans. I hope that there will be more books in the Damselfly series. I would love to know more about Sugar and Clara. If you have not read Sugar Plum then I highly recommend that you pick up your copy today.

I loved this. It grabbed me from the start and pulled me along on a great dystopian adventure in a future post Third Civil War future. I bought Damselfly immediately and can't wait for the next book, which will finish both girls' stories.

You have subscribed to alerts for Jennie Bates Bozic.

You have been added to Jennie Bates Bozic's favorite list.

You can also sign-up to receive email notifications whenever Jennie Bates Bozic releases a new book.