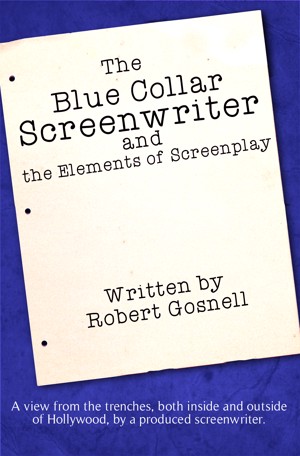 The Blue Collar Screenwriter and The Elements of Screenplay

The Blue Collar Screenwriter recounts his journey from blue-collar worker to Hollywood screenwriter, and the hurdles encountered and lessons learned along the way, while exploding some of the myths and misinformation surrounding the screenwriting profession.

Part Two, The Elements of Screenplay, presents detailed information on screenwriting form and format, covering every aspect of the process, from the idea, through the execution to the marketing. Not only a guide for aspiring and existing screenwriters, The Elements of Screenplay will appeal to film buffs who might be curious about how their favorite movie began it's evolution to the screen.
Available ebook formats: epub mobi pdf rtf lrf pdb txt html
First 20% Sample: epub mobi (Kindle) lrf more Online Reader
pdb
Price: $4.99 USD
Buy Add to Library Give as a Gift
How gifting works
Create Widget
Tags: screenwriting howto movies television writing
About Robert Gosnell

A professional screenwriter for more than twenty-five years, Robert Gosnell has produced credits in feature films, network television, syndicated television, basic and pay cable, and is a member of the Writers Guild of America, West and the Writers Guild of Canada. Robert began his career writing situation comedy on the staff of the ABC series Baby Makes Five and freelanced episodes for Too Close for Comfort and the TBS comedies Safe at Home and Rocky Road. In cable, he scripted numerous projects for the Disney Channel, the Showtime original movie Escape from Wildcat Canyon and the Denver produced film Tiger Street. His feature credits include the Chuck Norris/Louis Gossett Jr. film Firewalker and the independent features Dragon and the Hawk, Siren and Juncture. Robert currently conducts screenwriting classes and workshops in the Denver area.

You have subscribed to alerts for Robert Gosnell.

You have been added to Robert Gosnell's favorite list.

You can also sign-up to receive email notifications whenever Robert Gosnell releases a new book.