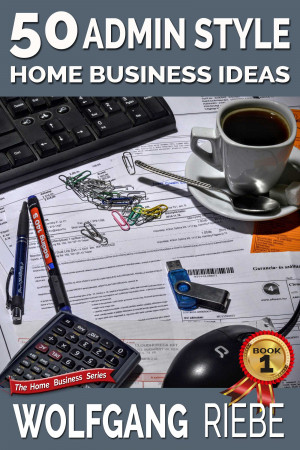 By Wolfgang Riebe
Part 1 of a series of 10 mini booklets. This book shares 50 practical home based business ideas - that's just under 2c per idea! More
This booklet contains 50 Admin Based Home Business Ideas that you can literally do in your pajamas and start part time at home!

Some require no start up capital at all. Others require some money. Many rely on skills you may already have, or skills that are relatively easy to acquire. No matter who you are, if you are looking for an extra side-line income, and possibly even a business venture that could become a full time business, this E-booklet has something for everyone.

Please note that this E-booklet does not supply you with business plans! It supplies you with practical ideas that you need to implement on your own. These ideas can easily trigger off many other possible ventures. It's aimed at people who want to work for themselves and become independent. Whether you are just looking for that extra money every month to make ends meet, or want to start a new career, this is definitely worth a read.

The other E-booklets in the series cover the following topics:

Wolfgang began his career as a magician on British television on BBC & ITV, later traveling around the world as a headline act on cruise liners before tackling expeditions throughout the Arctic & Antarctic where he performed world-class illusions to thousands of international passengers.

In later years he relocated to Cape Town from where he focused on the EMEA market combining strategically planned illusions with speaking in order to reinforce corporate messaging throughout Africa, Europe and the Middle East. He completed a thesis in Complexity Thinking and its affect on Innovation amongst leadership in multi-national organisations at the York St John university in the UK.

His passion is to share life truths and connect people through logical thinking and fun, as can be validated through his You Tube channel (inspiringtheworld) with over 850 videos. In 2015 he appeared as a TEDx speaker and is currently based in Frankfurt where he focuses on the English Speaking meetings & events market and has performed in over 150 countries during the last 25 years.

From symposiums, conferences, strategic planning sessions, cruise liners, television to expeditions, his vast variety of incredible life experiences make him the perfect host as your Keynote Speaker, Master of Ceremonies and Celebrity Comedy Entertainer, turning your whole event into an unforgettable sophisticated experience where creates Memorable Magical Moments for everyone.

You have subscribed to alerts for Wolfgang Riebe.

You have been added to Wolfgang Riebe's favorite list.

You can also sign-up to receive email notifications whenever Wolfgang Riebe releases a new book.