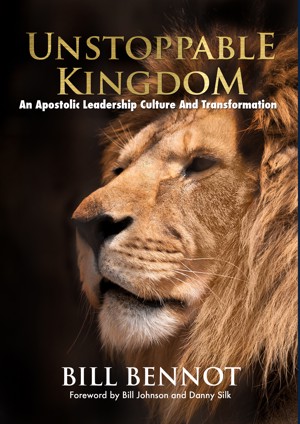 By Bill Bennot
Unstoppable Kingdom is about an ‘apostolic people’ creating a culture where entire cities can be loved into the kingdom. It defines and demonstrates an apostolic leadership culture; where the beliefs, values and behaviors of heaven, as represented and modeled by apostles and apostolic teams, become characteristic of a community of people who are being activated to bring sustainable change. More
When Jesus told His first cohort of leaders to pray “Thy kingdom come, Thy will be done, on earth as it is in heaven” He set the benchmark for all future generations. The kingdom of God coming on earth as it is in heaven is what Jesus paid for with His blood and what God’s people have been called, graced and gifted to accomplish. When the apostle Paul told the Colossians that they were “delivered from the domain of darkness and transferred into the kingdom of God’s beloved son,” he was not referring to the celestial afterlife. He was underscoring a present application of divine authority in all walks of life; as Jesus said, “If I cast out demons by the Spirit of God the kingdom of God has come upon you.” In other words, His kingdom does not begin with “end of the age” rewards, but with Spirit-empowered leaders encountering God daily, connecting in communities of faith and engaging a fallen world with transformational truth and power. This transformational environment, or kingdom culture, can and should be available throughout the Body of Christ. Critical to achieving this quintessential kingdom environment are apostles, apostolic leaders and an apostolic people. Far from being an antiquated approach to biblical leadership, the apostolic is an essential part of any sustainable transformation.
Apostles are more than just pioneers, miracle workers and church planters. They are social transformers commissioned by God to serve people, shape culture and transform cities. Apostles and apostolic leaders function in a sphere of authority that equips and empowers others for effective transformation and positive change. They create environments where a diversity of leadership callings, gifting, skills, personalities and relationships partner together towards an improved future. Not only are apostolic leaders and ministries among God’s greatest agents for fostering transformative change, the twenty-first century global context is providing more traction and leverage for that change.
This book looks at the calling, focuses and impact of apostolic leadership in the twenty-first century. It draws from biblical history, church history, contemporary culture and thirty years of ministry experience in Africa and the United States. By combining principles and patterns from scripture with the ministry experiences and insights of many diverse leaders, this book addresses a category of leadership vital for effecting broad-based transformation. Rather than focusing on specific leadership personalities, traits and abilities, this book looks at values, beliefs, behaviors, actions and processes most essential for creating an environment where people can become transformed and transformational within their communities. Among the topics covered in this book that are most necessary for developing an apostolic leadership culture are: 1) a biblical and contextual understanding of the “kingdom mandate” and the apostolic; 2) the vitality of apostolic values; 3) non-negotiable relational foundations; 4) effective team leadership; 5) global competence and innovative capacity; and 6) Spirit-filled enablement and the long haul. This book reflects the convergence of kingdom truths most relevant for stewarding transformation in communities and cities.

Bill experienced a radical conversion to Christ while attending the University of Tennessee on a wrestling scholarship in 1979. Along with his wife Connie, he began fulltime Christian ministry in 1981. Up until 1986, Bill and Connie pioneered and led campuses churches in California, Arizona and New Mexico. Besides ministering on university campuses throughout the Western United States, Bill began traveling into various African countries in 1982. Then in 1987 Bill and Connie moved to Johannesburg, South Africa. They pioneered the His People Christian Church which grew to a couple thousand, and became an apostolic base for church planting in Africa. Over the next 18 years Bill worked with leaders and teams to plant churches and campus ministries in every major city in South Africa. He also served leaders and churches in Namibia, Zimbabwe, Zambia, the Democratic Republic of the Congo, Botswana, Tanzania, Kenya, Uganda, Nigeria, Ghana, Sierra Leone and the Ivory Coast.
In 2005 Bill and Connie established a second base in Nashville, Tennessee, while simultaneously moving their African base to Cape Town, South Africa. Over the next 5 years they served multiple churches and leaders in Africa and the United States; their focuses being revival, reformation and cultural transformation. From 2007-2009 they led the leadership team for the 7000 member His People Church in Cape Town, South Africa.
Bill and Connie are currently pioneering a leadership alliance called BMosaic. BMosaic is a gathering of Jesus-centered, relationally-connected and kingdom- minded leaders who are partnering together for the purpose of bringing the glory of His kingdom everywhere. They are also currently launching a new church in Cape Town called Journey of Grace.
Bill holds a Masters degree in organizational leadership and a Doctorate in strategic leadership. His wife, Connie is the founder and director of Redemptive Solutions, a Christian counseling practice. Bill’s apostolic ministry and Connie’s prophetic ministry are teaming together with a diversity of leaders throughout the body of Christ to release heaven on earth. They have three sons, Ben, Adam, and Ethan, and one daughter, Melody.

You have subscribed to alerts for Bill Bennot.

You have been added to Bill Bennot's favorite list.

You can also sign-up to receive email notifications whenever Bill Bennot releases a new book.