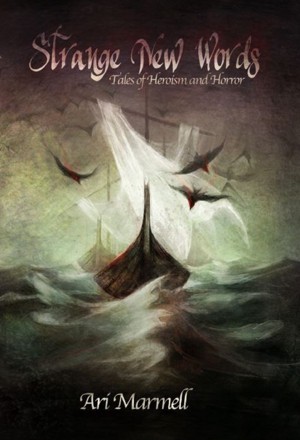 By Ari Marmell
Windows into the fantastic, from crypts to cobras, swords to submarines, rubies to railroads, heaven to hell and places stranger still. Heroes, horrors, and hijinks--both original to this collection and reprinted from a variety of sources--from the mind of Ari Marmell, author of The Conqueror’s Shadow, The Goblin Corps, Darksiders: the Abomination Vault, the Widdershins Adventures series, and more More
In Strange New Words, let Ari Marmell guide you through over a dozen windows into the fantastic. Heroes, horrors, and hijinks await you, including:

“The Cemetery Wyrm”: A childish fascination with the old, pitted monument was understandable, but not the ongoing obsession—or his certainty that the effigy was something more . . .

“The Purloined Ledger”: In the early days of the Great Depression, a PI who is far more than he appears must outwit a gangster whose efforts may have turned to sorcery.

“The Shaman’s Tale”: Why do the proud and warlike orcs serve always as the minions, never the master? The answer lies in the mists of the oldest orcish legends . . . A brand new story set in the world of The Goblin Corps!

“Railroad Spikes”: He thought the train was easy pickings, treasure ripe for the taking. He was very, very wrong. Saw meets The Great Train Robbery in a steampunk Wild West.

“The Rubies of Olun-Zeth”: In a brutal, vicious land ruled by brutal, vicious gods, Lathaan the Heretic knows that the promise of treasure is a promise rarely kept. But what if . . . ?

“Big Apple, Small Serpent”: Loosed from the confines of her tiny world, this little Egyptian cobra was never going back to her exhibit. She was free, and would remain so—no matter what it took.

“Reaver”: Was the evil in the ship that had grounded itself on Lincaster’s docks, or had it always festered in Lincaster itself? A full-length novelette.

“Twenty-One-Oh”: In a dystopian future of all-power corporations, missing a deadline on even a simple delivery can cost you a lot more than just your job . . .

“Tithe”: It is a theme common to the tales told every girl and boy of the fairy courts: Never trust a bargain made with the tricky and treacherous human race.

“Than to Serve in Heaven”: It was an offer even Lucifer couldn’t pass up. Still, through it all, he wondered, and the angels with him. Why would God put him in charge of Heaven?

“The Ogre’s Pride”: Unlike his bloodthirsty brethren, Davro the ogre just wanted to be left in peace. Still, some insults cannot be ignored, and some things are always worth fighting for.

“In Deepest Silence”: The USS San Jacinto should have been prepared for anything in the ocean’s depths—but you cannot prepare for what cannot exist!

“One Solitary Scale”: Only the sculptor himself knew he had traded his soul for his talent. Now he had found a way to break that bargain, but had he merely traded one Hell for another?
Available ebook formats: epub mobi pdf lrf pdb html
First 25% Sample: epub mobi (Kindle) lrf more Online Reader
pdb
Price: $3.99 USD
Buy Add to Library Give as a Gift
How gifting works
Create Widget
Tags: urban fantasy horror fantasy short stories sword and sorcery dark fantasy cyberpunk fae fey
About Ari Marmell

Ari Marmell would love to tell you all about the various esoteric jobs he held and the wacky adventures he had on the way to becoming an author, since that’s what other authors seem to do in these sections. Unfortunately, he doesn’t actually have any, as the most exciting thing about his professional life, besides his novel writing, is the work he’s done for Dungeons & Dragons and other role-playing games. His published fiction consists of both fully original works and licensed/tie-in properties—including Darksiders and Magic: the Gathering—for publishers such as Del Rey, Pyr Books, Titan Books, and Wizards of the Coast.

Ari currently lives in an apartment that’s almost as cluttered as his subconscious, which he shares (the apartment, not the subconscious, though sometimes it seems like it) with George—his wife—and a cat who really, really thinks it’s dinner time. .

You have subscribed to Smashwords Alerts new release notifications for Ari Marmell.

You have been added to Ari Marmell's favorite list.

You can also sign-up to receive email notifications whenever Ari Marmell releases a new book.