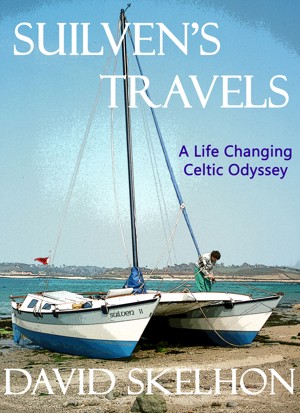 By David Skelhon
In 1985 David Skelhon and his partner left behind promising careers and financial security to pursue their dreams and live closer to the Earth. Skelhon vividly tells a tale of high adventure, struggle and self-discovery aboard a small catamaran they built and later sailed across the rough and unforgiving coastal waters of England, Wales and Scotland during a 3 month voyage in 1990. More
Thirty years ago I quit my job in science and engineering. Even in my late 20’s I was tired and disgruntled with the world and my place in it. I wanted to get off the treadmill, and experience the beauty of Planet Earth, or at least my little corner of it.

My partner Jill Brown and I looked to the world of sailing for travel and adventure. We sold our home, built a 26’ Wharram Polynesian-style catamaran and moved to the ocean. We struggled to make a living in Cornwall, one of the most beautiful maritime counties in the British Isles. I built boats and together with Jill wrote four regional guide books for major publishers. I was also a regular contributor to Practical Boat Owner magazine and editor of Sea People, the journal of the Polynesian Catamaran Association. It took a few years but the dream of adventure became real and the result was an extraordinary voyage around the west coast of Britain in the summer and autumn of 1990.

Suilven’s Travels is my account of this 3 month, life-changing odyssey, which was packed with adventure and challenge. Suilven II departed Plymouth in July and headed north to the Hebrides, stopping in Scilly, Wales, the Isle of Man and Northern Ireland. The story brings to life the landscape and culture of western Britain and in particular Scotland’s Inner Hebrides. It also shows what is possible on a minimal budget if the desire is strong enough to succeed. I was alone for most of the outbound trip, which gave me plenty of time to reflect on the world and my place in it. Jill Brown sailed with me on the demanding return trip when we struggled against autumn gales and rough seas and came close to losing our small boat on a couple of occasions.

Looking back nearly 25 years it’s obvious there has been dramatic change in our world – especially in technology. But the human spirit and the search for meaning in life is growing stronger as more of us realize it is becoming impossible to thrive in a system which essentially alienates us from our Earth, and our true selves. Suilven’s Travels was written to inspire others to step outside the box and live closer to the Earth.
Available ebook formats: epub mobi pdf lrf pdb txt html
First 20% Sample: epub mobi (Kindle) lrf more Online Reader
pdb
Price: $4.99 USD
Buy Add to Library Give as a Gift
How gifting works
Create Widget
Tags: yacht sailboat catamaran lifestyle at sea scottish adventure sailboat cruising sailing books sailboat adventure growth and healing irish sea
About David Skelhon

David Skelhon is an accomplished photographer, writer, sailor, commercial pilot and boat builder. He was born in the UK and moved to the province of British Columbia on Canada’s West Coast in 1996.
He is best known in the UK for his contributions to sailing and adventure magazines, and as the co-author of several regional guide books.
In Canada, his aerial photography has appeared in national and regional publications and exhibited in public and private art galleries. Portfolios have appeared in Photo Life and BC Magazine. For several years he worked as a freelance reporter/photographer for the Vernon Edition of The Daily Courier.
He was a flight instructor for 7 years and recently worked as a bush pilot in Northern Alberta and the Yukon.
He loves empowering others and encouraging thinking “outside the box."

You have subscribed to alerts for David Skelhon.

You have been added to David Skelhon's favorite list.

You can also sign-up to receive email notifications whenever David Skelhon releases a new book.