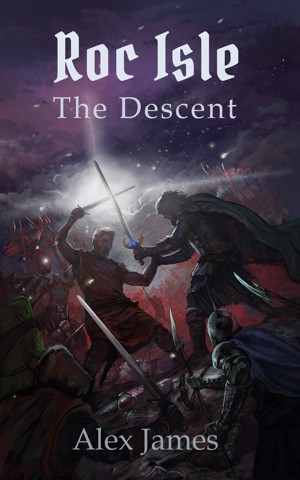 By Alex James
Rated 4.00/5 based on 2 reviews
In the North, Lord Azure of the Azure-Cloud Clan vows revenge on those responsible for ordering the assassination of his parents. Lord Azure will invade the South in reprisal, and to rid the land of the infidel. In the South, Ankah is a Knight Prentice. Frustrated that he is yet to be ordained, he wonders what his destiny is and why it is he wants to fight. This is The Descent! More
Roc Isle: The Descent is a heroic fantasy novel based on a tale of revenge and destiny.

It is now Year One, foretold to be the final year before The End of Roc Isle.

In the North, Lord Azure of the Azure-Cloud Clan vows revenge on those responsible for ordering the assassination of his parents. Lord Azure will invade the South in reprisal, and to rid the land of the infidel. But first he needs to raise an army to his banner, which will prove difficult. The Azure-Cloud Clan is divided: the Azure-Knights of Crag Rock refuse to owe him their allegiance. In spite of this, Lord Azure is the greatest warrior of his clan, and his search for redemption and vengeance will not be stopped until Roc Isle answers to him.

In the South, Ankah is a Knight Prentice. Frustrated that he is yet to be ordained, he wonders what his destiny is and why it is he wants to fight. He is the strongest, fastest, and most determined of swordsmen.

Reviews of Roc Isle: The Descent by Alex James

This book is an epic fantasy yarn, with a tried and true structure that I found comfortably jamiliar yet original in its own right. I have always had a love for this kind of fiction, whether Tolkien, Tad Williams, Terry Goodkind or Terry Brooks. It is where I started my love for fantasy fiction and is always welcome on my bookshelf. This book fits right in.

I have always found world-building difficult and full of landmines and quagmires. This book is set in a fully and well researched world. It is deep and full of great histories that drive the current conflicts. And, although it bears some resemblance to other stories, it is unique enough that it feels quite different.

The characters in this book are easy to relate to. I especially like the character, Ankah, and his early feelings toward a certain girl and home town--feelings that make this guy human and that continue to change and grow throughout. This character’s personal evolution and character arch are pretty compelling and filled with competing feelings of empathy and sometimes even dislike. But, I always found myself rooting for him.

Overall, I thought that this was a good book, and a fun read. If you like heroic fantasy, or sword & sorcery fiction, I think you will like this book.

(reviewed the day of purchase)
Kayla West reviewed on April 25, 2014

I absolutely adore novels of fantasy. Stories of kings and queens, lords and ladies, knights and the honor that so defines them. And to me, any great fantasy novel has a certain feeling to it. It is an elegant feeling, a regal feeling. One that makes me sit straighter and hold my head high. One that makes me feel as if I have awakened in the land itself and have become one of its very characters. It is a feeling that is indescribable at best and which, when experienced, is never forgotten for the rest of one's life. And this book definitely brought that feeling out in me...in bits and pieces...but nonetheless I did feel something, and that is a start.

Roc Isle: The Descent focuses mainly on the lives of two characters. The first one introduced to readers is a boy named Ankah, who lives in Clenly Village with his father. When an honorable decision on Ankah's part turns into a ploy to steal money from a champion Knight, opportunity will arise for Ankah to leave his village and possibly become a Knight himself. But he will realize in his learnings that he wants something more...

The second one is a boy no older than 14 at his introduction. His parents are slaughtered and his temple attacked, causing him to take his father's place as Lord of his people. He will be faced with disdain and mocking, and in his years as a man, traitors and enemies who want him gone.

Both will be united in a war that could either end in substantial good or disheartening peril. And both most certainly will find their true allies during the fight.

While the storyline was very good, quite exceptional really, I felt there were times in the beginning where things didn't mesh well. To me, good transitions are everything in making a story flow beautifully, and sometimes I felt that the writing was a bit choppy. I also felt that while many parts did have that regal, elegant feeling that I mentioned at the beginning of this review, there were parts that could have been reworded or maybe a sentence or two added to enhance that feeling in the rest of the story.

This book is wonderful and well worth the read.