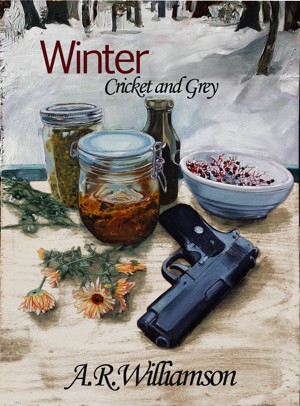 By A. R. Williamson
At the end of the twenty first century, life is hard enough for Cricket Winters, a small town apothecary in Western Oregon. When her father dies, leaving her with steep unpaid tax bills, she discovers the secrets he's been hiding about her mother's death, and it gets a whole lot harder. Now, as she takes on a dangerous job as an armed guard for the local Mormon crime boss, she must also keep one More
Cricket Winters is a second generation apothecary in the rural Willamette Valley. American culture has just kind of... wound down. Times are hard, and most people don't have much.

Her parents have both died, and burying her father means actually digging the grave. At the grave side she meet Grey, the mysterious man whom her father charged with her safekeeping.

A. R. Williamson survived 6 years in the wilds of the Willamette Valley which inspired her first novel 'Winter; Cricket and Grey'. She learned to shoot, to can, and to alienate a whole community of bible thumpers. Now she resides in northern California and enjoys a cozy, if impecunious, life with her husband, son, mother, and six pets.

Learn more about A. R. Williamson

Reviews of Winter: Cricket and Grey by A. R. Williamson

You have subscribed to Smashwords Alerts new release notifications for A. R. Williamson.

You have been added to A. R. Williamson's favorite list.

You can also sign-up to receive email notifications whenever A. R. Williamson releases a new book.