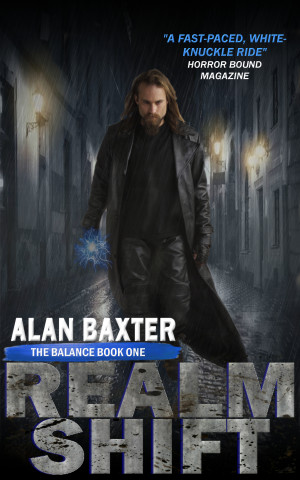 By Alan Baxter
Rated 4.63/5 based on 8 reviews
A race against time and the Devil.

Samuel Harrigan is a murderer. He used ancient blood magic to escape a deal with the Devil. Now Lucifer wants Samuel’s soul and refuses to wait a second longer for it. Isiah has a job to do. He needs Samuel to complete his destiny, so he has to protect Sam and keep the Devil at bay.

Also in Series: The Balance

Reviews of RealmShift by Alan Baxter

Just a short note that I enjoyed this book. It managed to hook me from the start and the slightly odd mix of action, fantasy, horror (as mentioned in an earlier review) worked for me as well.

(reviewed 14 days after purchase)
Phillip Berrie reviewed on Dec. 20, 2012
(no rating)
A while ago Alan Baxter gave away eBook versions of his Isiah duology as part of a promotion for the Thrillercast podcast that he hosts with American thriller author David Wood. In preparation for reading Magesign I decided to re-read Realmshift (I'd already picked up and read a physical copy of Realmshift at local Australian con).

It's still a damn good read and more so when in retrospect you start to think about what the author tries to achieve with his main character, Isiah.

Isiah is an immortal and very powerful agent of the BALANCE, someone who can go toe-to-toe with Satan. His job is to deal with such beings as demons, vampires and angels to make sure that the status quo of the gods (and there are many in this world) remains balanced. All without knowing the full details of what is going on and having to protect someone he detests. In the end the balance is maintained and all the 'bad' people get their comeuppance and so the reader is left satisfied.

It's a fascinating cosmology and an interesting setting, which in parts teases with the hints of what else might be happening in this world, and I look forward to see what the author does in Magesign. I wonder if he will be brave enough to have Isiah on the side of the bad guys, which must be a possible consequence of the character's role in the universe.

Not recommended for anyone who has strong traditional feelings about the Christian religion.

It's been long enough since I read this that if the "To read" mountain at home allows I think I might have another look, because it was well worth the effort.

The blurb sums the story up nicely: Isiah is the souped-up protagonist and earthly agent for The Balance, a mysterious universal force not concerned with good or evil but in keeping the world in some sort of order.

On The Balance's say-so, Isiah must perform some occasionally random-seeming actions - sometimes good, sometimes horrible and sometimes very minor - to prevent the butterfly effect spinning out of control and causing much greater consequences down the track. On this basis he is charged with protecting Samuel Harrigan - a man for whom the phrase "stain on the undies of humanity" was quite possibly coined - from the devil for long enough for Samuel to be able to inadvertently stop another series of events.

With this sort of basis as you can well imagine the plot is fast-paced and creepy as Isiah fights his way (quite literally) to Hell and back to complete his mission.

I really liked the idea of The Balance and the religious theories in general. Since gods and spirits exist through the strength of belief they garner, a great variety of deities and pagan spirits litter the pages. I had a good bit of fun looking up some on Wikipedia and learning new things.

For those delicate readers out there this book is a bit heavy on the swears and violence and will probably disjoint the nose of anyone with a particularly strong religious view, but for anyone with a thing for dark fantasy or horror this is a great combination.

It didn't take me long to hunt out the sequel Magesign once I'd finished.

(reviewed the day of purchase)
Laurens Leurs reviewed on Dec. 13, 2009

An interesting and strangely compelling read. This books is a pretty unusual mix of fantasy, action and horror but much to my surprise this actually works. The story quickly becomes a page turner.

(reviewed 44 days after purchase)
Cathy Russell reviewed on Dec. 2, 2009
(no rating)
I really enjoyed this book, especially the underlying philosophy that belief shapes reality. I have to admit though, it was fun watching a superhuman capable of kicking the Devil's ass.

The writing style was engaging, and the characters were well thought out. I didn't like the villains much, nor did I sympathize with them, but at the same time I could see their point of view and how they got to be the people they were. There was plenty of action, and the more I progressed in the story the more I wished someone would make it into a comic or a movie. The plot and characters would be great in either one.

Technically speaking, I originally tried the PDB format but it didn't work that well for me with my reader. The PDF format seemed to work a lot better (G1 Android phone).

This is a spectacular book! It is supremely written and grabbed me from the start and kept me there until the end.

I loved it. This book will definately be read again and again.

and here's my rating!

(reviewed 22 days after purchase)
cbell reviewed on Sep. 19, 2009
(no rating)
I've just gone for a ride on the rollercoaster that is RealmShift!

We have 3 stories running alongside each other, and I can't pick my favourite. They all held my interest and I couldn't wait to pick up the book again when life and sleep interrupted my reading.

When the 3 stories collide in the climax towards the end of the book, I was reading fast and furious, eating up the words, absolutely focussed on what was happening, right there with the characters.

Alan, I'm trying not to believe in that unmentionable place full of horrors, but you made it so believable. It was horrifying. I had cold shivers reading some parts of the book, brr.

Plenty of horror and fantasy, throw in some religion, sci-fi and history, and you have RealmShift. Wow! This book was worth every cent and more.

As soon as I'd finished RealmShift, I started MageSign. I want to keep reading about Isiah.

Thanks, Alan! What a great book!

Very fast-paced action, easily read in 1-2 sittings. Describes a world with the supernatural being effectively an extension of people's consciousness and worked into our normal world. You get shown an interesting afterlife complete with a semi-parody of real-life religions and beliefs. Good novel debut.

It's quite story-driven so rather than describe what happens I'll just recommend it if you're interested in any type of fantasy, religion or mythology.

(reviewed the day of purchase)
Sebastian Nemeth reviewed on Jan. 13, 2009

The drive to explore our spirituality is an essential function of the human condition and Alan Baxter's RealmShift indulges as a unique and thought provoking novel, converging on philosophy and popular mythology.

Being well and truly grounded in dark fantasy, Alan isn't squeemish when it comes to the details. It is a bloody and brutal story which can be interpreted as a commentary of the individual coming to terms with their spirituality.

Isiah, the angelic protagonist in the story, is the vessel for this transformation. As a powerful agent of 'The Balance', which is the conscious nature of the Universe, Isiah is confronted with a kind of 'macro-morality' as he polices the world and its cadre of colorful and familiar Gods.

As Isiah conducts his duty his interactions with mortals, angels, gods, vampires and satanic wizards weave a fast paced story braced with stylish settings and action fueled by Alan's own mastery of the martial arts.

Alan's emerging writing style in RealmShift is poignant and atmospheric, developing the vague sensation that one is reading about an action movie they watched only a few months ago.

Having engaged the reader on multiple levels, RealmShift is able to conclude with a convincing finale, testing the reader's loyalties to the novel's characters and leaving them with a satisfying itch for a sequel, which conveniently exists. Alan carries on the tradition brilliantly in MageSign.