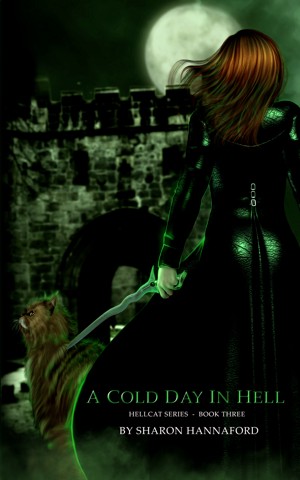 Rated 5.00/5 based on 1 reviews
Hellcat and Julius take on the biggest and baddest the Vampire world has to offer in the third instalment of the Hellcat Series. More
The City may be calm, but is the Hunter about to become the hunted?

For the first time in months the City is peaceful, so peaceful that Gabi’s suspension from the Societas Malus Venatori doesn’t feel like a punishment. Her relationship with Julius is stronger than ever and Kyle has finally found his soul mate, even if he seems to need some convincing. Gabi thinks boredom is her most serious problem. She couldn’t be more wrong.

The visitor Julius has been both expecting and dreading arrives, bringing with him dire news. An old enemy, out to destroy them, has revealed to the Masters of the Vampire race that Gabi is a Dhampir. The visitor’s presence also answers the question that’s been simmering in Gabi’s head for years; the truth of her origins. This truth brings with it a deeper understanding of the implications of her very existence, and she doesn’t like what she discovers. But it’s too late to change what’s been done and Julius must now answer to the Princeps’ Court.

As Gabi makes plans to leave the City, drawing danger away from friends and family, a dark prophesy by the Magi Oracles forces her to change course. She will not be leaving the City alone, and she will not be running from the threat. She, Julius and a handful of others will be heading straight into the mouth of the beast. They must present themselves at Court before the Princeps travel to the City and inadvertently uncover one of the most closely guarded secrets of the Magi world.

While the Princeps wear a face of impartiality and civility, what boils beneath the surface is a storm of selfishness, greed, lust and perversion. Danger lurks in every corner and it soon becomes clear that someone is determined to ensure that Gabi will never get the chance of a fair hearing.

Old friends and old enemies do what they have always done best, while new friends and new enemies emerge at every turn. Only one thing is sure; it’ll be a cold day in Hell before Hellcat goes down without a fight.

Put the coffee on and warm up your page-turning finger, it’s going to be a long night.

Sharon has been calling herself a writer since she was eight years old. She wrote her first auto-biography at age ten. As a teenager, she was teased about being a witch, because she wore lots of black and walked around with her black, Oriental cat on a lead. She never disagreed too loudly, after all, that may have drawn attention to the herd of unicorns that lived in her back garden.
Born and raised in South Africa, she has called New Zealand home since 2008. Her life consists largely of looking after her husband, two kids, three cats, a dog, a pony and a horse, but her working day is spent writing, and her occasional hours off usually include books, horses or a glass of good red wine.
Though she has had many jobs over the years, her favourite is, without doubt, being paid to write about the characters who take up residence in her head. After an early foray into writing for children, Sharon discovered Urban Fantasy; the genre that felt as though it had been created with her in mind. She loves nothing more than to create strong-willed, female lead characters, who challenge those around them almost as much as they challenge themselves.
Sharon also loves animals of all shapes and sizes. She has owned all the usual suspects one would keep as a pet, and a few more exotic ones thrown in for good measure. She spent her teens working at a tourist farm and animal park, and as a result has handled everything from porcupines and warthogs, to ferrets and hedgehogs. She has been surrogate mom to many orphans including; kittens, lambs and an eagle owl. No matter how hard she tries, animals always seem to steal the limelight in her novels.
She loves to hear from readers and welcomes messages via any of the usual channels.

Also in Series: The Hellcat

Ms. Hannaford has me hooked. I love all three books in the series. This latest installment is by far, the best!!! I really enjoyed following Gabi and Julius. Gabi is strong, smart and caring and Julius is sexy as ever. He's definitely the best boyfriend material! The story line was exciting and it felt like a heart stopping rollercoaster of action and emotions. Once I picked up the book, I couldn't put it down until I finished it. Can't wait for the next one to come out!

You have subscribed to alerts for Sharon Hannaford.

You have been added to Sharon Hannaford's favorite list.

You can also sign-up to receive email notifications whenever Sharon Hannaford releases a new book.