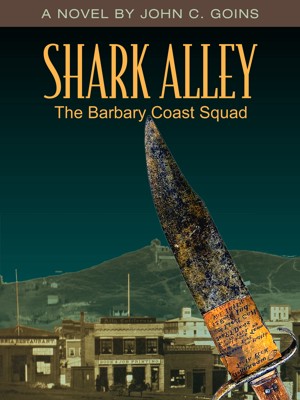 It's 1877 in San Francisco, and an insane ex-Confederate Colonel is murdering members of the famous Barbary Coast Squad. "Shark Alley" follows Detective Inspector Nick Lockwood as he pursues the evil Colonel Tobias before Lockwood's hidden past is revealed.

John C. Goins is a writer, musician and songwriter.

He grew up in Portland, Oregon and was the bass guitarist in numerous Portland bands including The Cleavers and Theatre of Sheep.

Shark Alley reminds me of the best of old paperback Westerns, but with a little noir grit blended in. And Goins brings a little more to it than simplistic six-shooter action. Make no mistake — there's plenty of action, but it's the good kind that carries the story forward, has purpose, and most of all, is inventive. There's enough action to keep you turning pages, but there's also enough story to make you care to see what happens to the characters next. And it's the characters that Goins really does well. The descriptions never drag on, but somehow Goins gives every character his or her own color. Some you'll recognize like an old friend, and some — like the villain whose grim quirks make him realistically creepy — have original twists you'll love.

Bottom line, Goins is a great story teller. And, for those readers who know San Francisco at all, it's a treat to see him bring historic visions of the City's neighborhoods alive with his characters, action, and story.

A tight, fast-paced yarn set in a colorful Barbary Coast landscape and filled with unforgettable characters. The author includes many interesting nuggets about life in San Francisco in the 1880’s, but the details never overwhelm the story. Recommended for anyone who likes a good action tale with a historical flavor.

If you enjoy Westerns and solid writing, check out "Shark Alley." Author John Goins recreates the Barbary Coast is all its flamboyant, grisly glory, populating the world with a host of cleverly drawn characters. Like a cross between Bonanza and The Wild Wild West, there are surprises and twists a'plenty, and I was grabbed from the first page. Can't wait for the next in the series!

John Goins’ riveting debut novel, set against the romantic backdrop of the early 1880’s Barbary Coast. offers an engaging plot line and colorful cast of characters including a sinister, blood-thirsty confederate General and a hero with a past to hide. This taut, fast-paced novel will leave the reader with great anticipation for the next installment.

This is like reading the love child of Tarantino and Bonanza. Goins captures the San Francisco Barbary Coast of the late 1800's in all its bloody and lively glory. With tons of action, and a wealth of colorful characters, Shark Alley is a great beginning to what will be a fun series to read.

You have subscribed to alerts for John C. Goins.

You have been added to John C. Goins's favorite list.

You can also sign-up to receive email notifications whenever John C. Goins releases a new book.