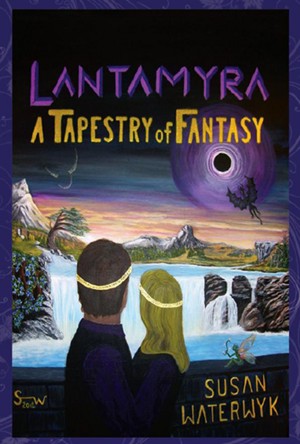 Lantamyra A Tapestry of Fantasy

By Susan Waterwyk
For the chance to journey to another world, Tylya Lansing is willing to give up everything on Earth, including her lover, Josh Hamilton. All she has to do is find her grandmother’s crystal scepter, lost for decades in a rugged Sierra Nevada canyon. Once the scepter is found she journeys to Lantamyra where she will study crystal powers ands become a Keeper of Dragons. More
LANTAMYRA is a journey of discovery to an enchanting world of natural beauty, terra-formed by ancient beings known as the Keepers of Akosh. It is a sanctuary world for refugees of two different planets, humans from Earth and dragons from Lanluong. They must co-exist until the time comes when the dragons can return to their homeworld and the humans can inherit Lantamyra. The dragons rule the three great Houses: Jade, Lotus and Snow. The human population lives and works to provide the needs of dragons as well as their own. They must also tend the ancient gardens of the Keepers of Akosh. It might be considered a Utopian society but the world of Lantamyra is harsh and cold, still recovering from an ice age. Severe climate, dangerous animals, famine and disease provide hard challenges to overcome. Begin the adventure in the beautiful rugged Gold Country of the Sierra Nevada Mountains of California. Meet Tylya and her lover Josh Hamilton, find the crystal scepter, and journey to Lantamyra to become a Keeper of Dragons.

My writing career began in 2005 with a dream of a lengthy conversation with a dragon. After discussing it with my family, we agreed it would make an interesting story. On Mother's day of that year, I wrote the first seven pages. Seven years later, I published Lantamyra: A Tapestry of Fantasy. Now, another year later, I have published A Tale of Two Worlds. My fantasies still include the company of dragons along with ancient extra-terrestrials that terra-form sanctuary worlds for species in danger of extinction. I live in the quiet woods of California's Sierra Nevada and admit that it has provided much of the inspiration for my books. I have a fondness for Nineteeth Century classical literature and poetry and encourage others to to enjoy them. I like to include a few of poems or songs in my stories because I believe every good story shoud have a song or a poem to add a bit of magic. "Starting with a melody, she'll lead you far away...down passages of poetry where dreamers often play."

You have subscribed to alerts for Susan Waterwyk.

You have been added to Susan Waterwyk's favorite list.

You can also sign-up to receive email notifications whenever Susan Waterwyk releases a new book.