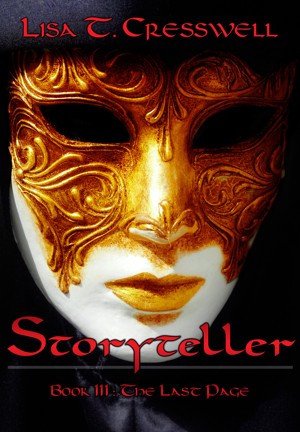 By Lisa Cresswell
Rated 4.00/5 based on 1 reviews
In this fable for all ages, a young fairy searches for her kidnapped mother in a race to save a dying world and fulfill an ancient prophecy. It is the third and final book in the Storyteller Trilogy. More
When her story began in Storyteller: The True World, Lily Lightfoot didn’t know she was a fairy with the power to make things happen, just by telling a story, but then everything changed. Now she’s on a quest to save the True World with only a few friends to help her. Her mother and her best friend captured, it’s up to Lily to complete the Quest of Galamar – a centuries old fairy tale. All she has to do is figure out how to turn back time. Easy, right?

In Storyteller Book II: The Quest of Galamar, Gabriel sent the three friends to find the Full Moon Amulet, hidden deep in the mountains and guarded by a fierce dragon. The amulet, one of four moonstones created ages ago by the fabled elf warrior Galamar, holds the power of the Northern Portal keeper, Ironblood the dragon. Whoever possesses all four amulets has the power to recreate or destroy the True World. Gabriel’s brother, Lord Kane, will stop at nothing to have the ancient powers for himself and keep Lily from fulfilling the Prophecy of Galamar.

The amulet recovered, Lily loses her guardian and best friend in the process. The only way to save him is to face the remaining portal keepers, the Griffin and the Harpy, and Lord Kane himself. As the True World prepares for an epic battle, Lily races to find those she loves and fulfill the ancient quest before it’s too late.
Available ebook formats: epub mobi pdf rtf lrf pdb txt html
First 10% Sample: epub mobi (Kindle) lrf more Online Reader
pdb
Price: $2.99 USD
Buy Add to Library Give as a Gift
How gifting works
Create Widget
Tags: love friendship adventure fantasy magic elf fairy dragon troll sword middle grade
About Lisa Cresswell

The Last Page, Book III in the Storyteller Series
book trailer for the Last Page

And they all lived happily ever after...

The story picks up right where it left off in book 2. Lily and her companions continue their quest for Galamar's gems, and the Formorians step up their efforts to find and destroy her. Peter's delima, Merab's back story, and the legendary feats of Galamar are also key to the resolution of the story. I don't want to spoil anything, so that's all I'll say about what happens in the book.

I think this is an excellent wrap to the series. Things hinted at in the first two books are revealed and resolved in this one. The author did a good job bringing this story to a close in a satisfying way, though a couple things felt like they were resolved a little too perfectly. Some of the details seemed to come out of nowhere, making them less believable.

I found myself getting a bit confused as to the order of Galamar's feats. The quests are revealed in bits and pieces when Lily reads about them as she tries to figure out what she and her companions should do in their real-time quest. Since the heroes are not visiting the portals in the order that Galamar did, it makes it hard to keep them straight. I think this started in book 2 and just continued into The Last Page. That being said, I enjoyed the legend and I think it would be fantastic if Galamar's story wound up in its own volume some day.

Overall, I really liked this book and felt satisfied at it's conclusion, though the ending seemed a little too perfect and the history gets a little confusing at times. I would recommend this book to those who love fantasy, fairy tales, youthful heroes, and quests.

As a series, I loved Storyteller. I highly recommend picking up all three books because you won't want to stop once you get started. The three books read like a single volume, though each one has a climax and partial resolution that leads to the next. The story, while scary in parts, is appropriate for middle-schoolers and would likely keep the interest of young readers.

I was lucky to have won a free copy of this series in a contest.