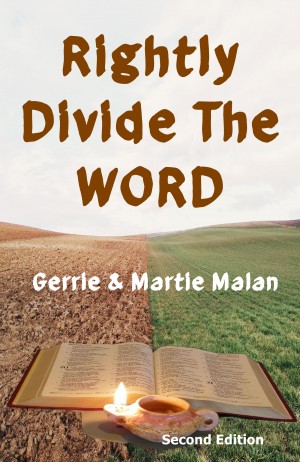 By Gerrie Malan
The author's research has shown the far majority of Christians have not been taught the important basic principles of Bible interpretation. This concise book deals with those basic concepts and principles to help the average reader to discern between original meanings of Scripture and the added philosophies that have marred clear understanding of the Bible. More
With this book the authors have striven to present a book for Joe Church, to facilitate a true and accurate understanding of the Scriptures. They discuss a number of basic, yet important principles to bear in mind when reading the Bible and point out the many distortions that pagan philosophical practices have led to, as well as errors flowing from subjectivity in translations of the Bible. A few important terms and expressions are discussed in the last chapter to illustrate why rightly dividing the word of truth is deemed so critical. This is a concise book that will not overwhelm the non-academic reader, but will certainly also provide much food for thought to the academic reader.
Download: epub mobi (Kindle) pdf more Online Reader
rtf lrf pdb txt
Price: Free! USD
Add to Library
Create Widget
Tags: hermeneutics bible explained bible study aid bible interpretation bible difficulties bible guidelines bible study teacher bible study reality bible accuracy bible integrity bible education bible study guide tips bible background bible exposition bible study for students bible chronology bible study resource bible scripture end times bible and culture
About Gerrie Malan

Gerrie and Martie Malan were married in 1970. Shortly afterwards he entered a new career in the South African Correctional Services, where he served for 25 years. They were transferred many times and also had to relocate twice annually between Pretoria and Cape Town for eight years when Gerrie was a member of the Correctional Services’ Parliamentary staff. Although Martie could take up employment for short periods in those years, she mostly found herself in the role of home maker, raising their three children – often under difficult circumstances.
Shortly after he was released on pension in 1995 following severe burnout, Gerrie became a lecturer in Correctional Management at the Technikon SA, which later merged with the University of South Africa. It was in this time that they left the Reformed church in which they were raised to go on a journey through the Pentecostal and Charismatic environments in search of biblical truth.
Martie, in the meantime, had taken on studies in biblical counselling, with Gerrie soon joining her. While she focussed on the area of emotional healing, Gerrie’s focus was on spiritual warfare. He continued afterwards with studies in the ministry environment and eventually completed a doctoral degree in Systematic Theology through the United Kingdom based Calvary University. For his thesis he studied Christ’s ‘born again’ and Paul’s ‘in Christ’ concepts. On their journey they had wonderful experiences and met precious people, church leaders as well as ordinary church members. But as they studied the Scriptures, more and more questions arose about specific traditional church doctrines.
A home group of five in April 2001 soon grew to a weekly meeting of some 50 people. The group quickly grew into a formal congregation (Hosea Christian Family Church), which later joined with another where Gerrie and Martie took up the leadership of the Bible College. Today they are not attached to any denomination as they focus on the search for biblical truth on many questions that developed during their journey through the Reformed, Pentecostal and Charismatic traditions. Unlike so many others who in similar processes have turned their back on the Bible, they feel that they have developed a much better understanding of the simple biblical truths when it is stripped of centuries of philosophising and pollution which robbed humanity of the kingdom life that was and is in God’s heart for His people.
The couple currently reside in the town of Hibberdene in the Kwazulu-Natal Province of South Africa. They have three married children and six grandchildren.

You have subscribed to alerts for Gerrie Malan.

You have been added to Gerrie Malan's favorite list.

You can also sign-up to receive email notifications whenever Gerrie Malan releases a new book.