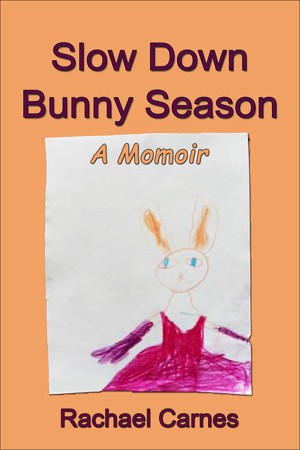 Slow Down Bunny Season: A Momoir

By Rachael Carnes
Divulging the Great Secrets of the Known Universe, as gathered from a cumulative 47,000 hours spent wiping kitchen counters, 'Slow Down Bunny Season' connects the dots between stealing highlighter pens on a temp job in your twenties, and how to handle it when a possum dies under your house. It's mothering, the way mothering was meant to be told: with laughter and tears. Mostly tears. More
Trawling the dark recesses of the author's sleep-deprived mind for amusing tales of woe, 'Slow Down Bunny Season' delivers a powerful punch of self-deprecation in sassy style. Motherhood, pulled off its pedestal, is reduced to the profoundly humiliating, and utterly rewarding, task that it is: cooking, cleaning, running errands, planning, organizing, baking, navigating the ins and outs of siblings... If a mom does it, it's talked about here, along with the great joys of faking your way into selling mortgage insurance, and trying - and failing - to lead a Girl Scout troop. Author Rachael Carnes candidly embraces the poop-up-the-back-of-your-baby's-neck Reality Party that is becoming and being a parent. Especially when you're parenting a kid who goes through stints of insisting on calling you 'Carole Mellow'... Explore the depths of exhaustion with a veteran of the Dawn Patrol. Throw out those books that shame you into thinking parenting is all about being perfect. This is where sh*t gets real.

Rachael Carnes spent her early years on the mean streets of Chicago, where she chewed a lot of bubblegum and rode her BigWheel everywhere. After moving to quiet Eugene, OR, she dedicated herself to the fine art of lying on her stomach and eating cereal from the box in front of the TV. After attending Reed College, Rachael wrangled Butoh performers in Seattle, started a business selling dance to parents in NYC, had a baby of her own, moved home, had another baby, and did more stuff. And ate more cereal.

You have subscribed to alerts for Rachael Carnes.

You have been added to Rachael Carnes's favorite list.

You can also sign-up to receive email notifications whenever Rachael Carnes releases a new book.