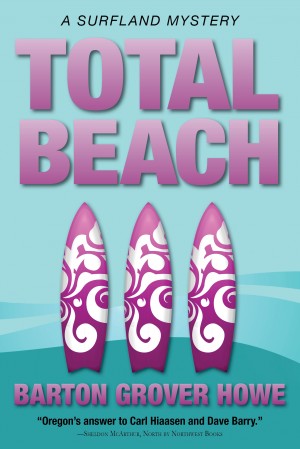 “Move over Carl Hiassen, Tim Dorsey, Steve Berry and all the other Florida humor satire writers. A new voice and a very accomplished one I predict will be around for a long time, Howe does for the Oregon Coast what Hiaasen and the others have done for Florida.”
—Sheldon McArthur, North by Northwest Books, on Beach Slapped

“A non-stop laugh you cannot put down.”
—Sheldon McArthur, North by Northwest Books, on The Beach is Back

Barton Grover Howe is an award-winning writer, humor columnist, stand-up comedian and performer who has spends his days finding the humor in life or making it up—sometimes both. When he’s not writing, or joking, he teaches high school, which inspires some of his best jokes. He lives in a small town on the Oregon coast within shouting distance of Surfland with his incredibly patient wife and exasperatingly adorable daughter.

Barton Grover Howe is a high school teacher and humor columnist who has spent most of the last 10 years teaching, being a mascot and generally not being near as funny as he thinks he is. A former newspaper reporter, hotel manager, aquarium diver, stand-up comedian, forcibly retired Disney On Ice performer and professional mascot, Barton Grover Howe has combined his experiences and skills from all of those environments to create writing with a voice like no other. Living proof that you don’t need hurricanes blowing the palm trees sideways to get beach slapped time and again.
He currently resides in the only small town on the Oregon coast that has seven miles of coastline and not one boat dock. He is married to the most patient woman on earth and is father to the cutest daughter in the universe, who got all of her looks from her mother.

You have subscribed to alerts for Barton Grover Howe.

You have been added to Barton Grover Howe's favorite list.

You can also sign-up to receive email notifications whenever Barton Grover Howe releases a new book.