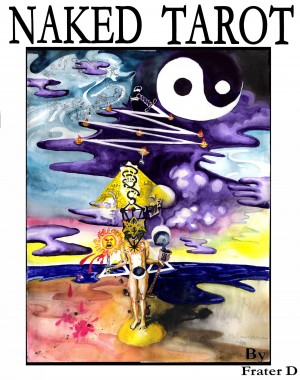 By Frater D
As Naked Tarot consecutively explains each card of the tarot deck it ends up explaining everything. This book becomes an excellent introduction to the Kabballah, and many aspects of the occult. Within this book is a complete system of magick with detailed instructions and diagrams. There are insights into alchemy, witchcraft, anthropology, ancient myths, religions, and the history of the Tarot. More
The book “Naked Tarot” by Frater D is a complete encyclopedia of the classic Tarot deck along with dozens of diagrams and 78 original cards designed by the author. This is officially the book about the computer tarot deck created by Davol White that is available at the nakedtarotdeck site. This is about each of the cards done with the underlying theme of the Hebrew name of God. Within the formula of Tetragramaton there exists the essence of the tarot deck, which re-iterates the formula throughout the deck to create a schematic for the macrocosmic and microcosmic perspectives for reality. Thus the tarot becomes an anatomy of God or Tetragramaton, and some traditions credit the tarot as being the means with which the Hebrews preserved their sacred mystical knowledge of God after the Roman dispensation of the Jews around the year 70 AD. The study of the tarot becomes also a means to discover the divine in addition to becoming a tool of divination for the sake of magickal development. This book explains each card in terms of the four elements of Tetragramaton and the Kabballistic Tree of Life, and the 16 court cards show the manifestation of Tetragramaton for individual personalities. This also introduces the astrological knowledge of the tarot deck, which some occult circles recognize by now as an esoteric secret of the Hebrew God. That esoteric secret was evidently brought out of Sumeria before there ever was an Israel, and it was probably made into a monotheistic interpretation by the great patriarch Abraham.

As this book consecutively explains each card of the tarot deck, it ends up explaining everything. Therefore this book becomes an excellent introduction to the Kabballah, and many aspects of the occult. Within this book is a complete system of magick with detailed instructions and diagrams. This book is also an excellent introduction to astrology and the creating of horoscopes. There are insights into alchemy, witchcraft, anthropology, ancient myths, and religions, as well as modern physics and quantum theories. There is information about medieval decks and early tarot history. The first appendix redesigns the Emperor card and transforms this Thoth version of the Naked Tarot into a traditional deck. The second appendix of this book also provides some basic card reading instructions, and there is a helpful glossary of over 200 words and obscure phrases. Naked Tarot is a complete encyclopedia of the tarot, not to mention a great work of art.
Download: epub mobi (Kindle) pdf more Online Reader
rtf lrf pdb txt
Price: Free! USD
Add to Library
Create Widget
Tags: occult history alchemy astrology tarot esoteric divination magick kabballa tetragramaton
About Frater D

Frater D actually no longer exists, but before his departure he created the Naked Tarot and wrote the definitive book on the subject. Not wanting to become the Deepak Chopra of the tarot, he wrote Naked Tarot as his final metaphysical thesis before disappearing into the abyss. Original watercolor paintings of these cards exist. The only credentials being offered for this definitive 21st century tarot deck is a lifetime of study in the subjects of magick, astrology, tarot, divination, meditation, and the Kabballah. Frater D was a voice in the wilderness of metaphysical wisdom and knowledge. Frater D belonged to no official organizations to speak of, although he had hinted that he belonged to an obscure group called The Secret Gathering of Gnostics.

You have subscribed to alerts for Frater D.

You have been added to Frater D's favorite list.

You can also sign-up to receive email notifications whenever Frater D releases a new book.