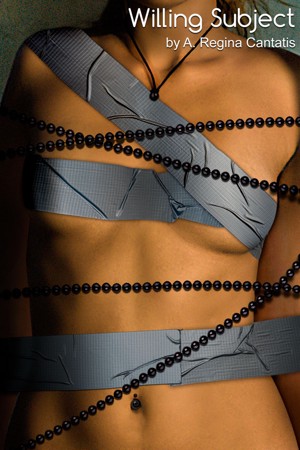 By A. Regina Cantatis
Adult Erotica

Rated 4.50/5 based on 4 reviews
They say you can only hypnotize a willing subject, and that’s true; but what happens when you’re willing enough to give everything? That’s what sorority girl Missy is about to find out. She’s always had a secret mind control fetish, so when an exotic hypnotist comes to town, Missy volunteers to join her show. She doesn’t realize how permanent her commitment might become. More
Missy is a typical sorority girl in every respect but one: she has a fetish for mind control. She’s always dreamed of exploring it in real life, although she’s been too embarrassed to indulge herself. But now an exotic hypnotist has come to town, and she proves just too tempting to resist. The Black Pearl of Thailand is charismatic and beautiful, and her outlandish back-story feeds right into Missy’s kink. She seems like just the person to help a skittish college girl play out her fantasy. The problem is, Black Pearl’s back-story isn’t a fantasy at all. She really is an ancient sorceress, and under her spell, Missy will spiral into deeper and deeper levels of submission until she loses herself entirely.
Download: epub mobi (Kindle) pdf more Online Reader
lrf pdb txt
Price: Free! USD
Add to Library
Create Widget
Tags: magic lesbian supernatural bdsm mind control hypnosis exhibitionism sorority
About A. Regina Cantatis

I might look like the hobbit next door, but I have a secret: I write slinky, kinky fetish erotica about mind control and total subversion of self. My stories are often dark because mind control just *is* dark, but sometimes I incorporate flashes of humor; and sometimes my characters escape or turn out to be willing participants in a game. Whatever the case, they end up enjoying their fates because I'm a sub. When you read about one of my characters being controlled, you're reading about my fantasies for myself.

These stories involve a lot of science fiction, a fair amount of paranormal phenomena, and occasional robots and tentacles. They also give you steamy hot, well crafted, startlingly personal peeks inside my mind.

Reviews of Willing Subject by A. Regina Cantatis

This is one of my favorite stories in the genre. It has been for a long time, and so it remains :)

This is a very delicious story. My favorite thing to see in a mind control story is the subject's mental response. That is something that is handled amazingly well in this story and it is such an enjoyable ride to watch. I can't go into more because my favorite aspects are spoilery, just seriously get this its awesome.

One of the most versatile aspects of the mind control sub-genre of erotica is the very fact that the person subjected to mind control may not be fully aware of their actions while being controlled. This transcends gender and sexual orientation; the biggest wild-card of this aspect is whether or not the subject actually wanted to be controlled before the control began.

In the case of this excellently written story, Missy clearly wanted to be controlled and her body responded to the very potential for control before she even went on stage at whaty purports to be the most amazing stage hypnosis show ever.

Without giving too much away about this scorching-hot narrative, the real intrigue comes in the aftermath of the show itself. Missy becomes enthralled by the Black Pearl and the powers she has over those she has hypnotized. Will she completely lose herself and her identity, or will she retain her individuality and her very self? Regardless, is that what she really wants? Read this book to find out?

You have subscribed to alerts for A. Regina Cantatis.

You have been added to A. Regina Cantatis's favorite list.

You can also sign-up to receive email notifications whenever A. Regina Cantatis releases a new book.