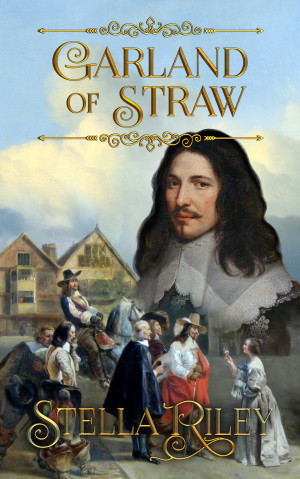 A 5-Star Gem
Having just read Ms Stella Riley’s ‘Garland of Straw’, which is part 2 of her ‘Roundheads & Cavaliers’ series, I can only say that this book deserves 5 Stars because it is an absolute Gem.
I make no apologies for saying that I am a huge fan of this writer and once again she has not let me down.
Thoroughly well researched and set against a back drop of political and social uncertainty in the post English Civil War, the period covers 1647 to 1649. Throughout Ms Riley intertwines the real history of the day with her own fictional characters so adroitly, creating a truly outstanding piece of work.
From Chapter 1 and the reading of Sir Robert Brandon’s will, I was captivated.
We immediately meet the male and female leads, Gabriel Brandon & Venetia Clifford, and discover that Gabriel is Sir Roberts’s illegitimate son who has been left the estate of Brandon Lacey provided he marries Venetia. This being a bizarre situation that neither wants as they had never met each other until the reading of the will! The scene is thus set for a tempestuous relationship as Venetia, spirited, strong willed and beautiful clashes with Gabriel, a deliciously sexy, well-crafted man and true gentlemen.
Again, as in her other books, Ms Riley produces wonderful characters who you actually like and are genuinely interested in. Her plotting is very good and credible. But her real strength is her use of dialogue because as you read you hear them speak; feel their moods; understand their worries and desires. The novel is so well written that you feel you are there in person with them.
Also, I like the way Ms Riley allows Gabriel & Venetia’s relationship to develop slowly and delicately until the inevitable moment of intimacy, which again is handled perfectly.
As to the history, it’s covered comprehensively and in a style I love. We’re shown how hard the Parliament tried to reach agreement with King Charles only for him to change his mind constantly in the hope of taking back his throne; we witness the battle of Preston and hear second hand of the siege of Colchester and the murder of Lucas and Lisle. We observe the Putney Debates first-hand and finally attend the trial of King Charles and see his ultimate demise.
I could wax lyrically of how well written and entertaining this book is for not only is it a really good, well plotted piece of work, it’s also illuminating on the machinations of a period of 17th Century English history that I for one have never read about other than in pure history books.
I started this review by saying that this book deserves 5 Stars because it is an absolute Gem and I conclude by reiterating my comment. Well done Ms Riley. I believe the 3rd instalment of this series is ‘The Kings Falcon’. I for one will be so looking forward to its publication.
Thank you.