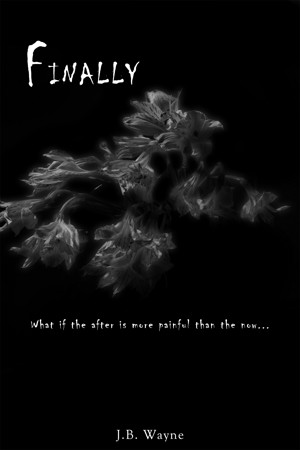 By J.B. Wayne
Rated 4.50/5 based on 4 reviews
When seventeen-year-old reaper, Rogue stops a girl from overdosing, Death threatens to steal and torture the girl’s soul, unless Rogue can gain her trust and convince her not to kill herself. More
Seventeen-year-old Rogue knows all suicides become Death’s reapers. How does he have the skinny on this? He offed himself in 1976, two days after driving the car that accidentally killed his girlfriend Lily. So when Rogue stops Emerson, a girl who looks exactly like Lily, from overdosing, it lands him on Death’s bad side. Not that Death necessarily has a good side.

As punishment, Death forces Rogue to spend one week inside a living body. Within this week, Rogue must gain Emerson’s trust and convince her not to kill herself, or Death will steal her soul and torture her for his own amusement.

The ticking clock bullies Rogue to push Emerson out of her comfort zone, only to discover a dark past leading her quest to die. Struggling with his own fears and memories, Rogue never expects Emerson to start falling in love with him. Or even worse, for the first time in decades, realizing he feels the same for her. Seeing the opportunity to manipulate and punish Rogue further, Death offers to let Emerson become a reaper if Rogue now encourages her to seek him.

Rogue wrestles with what to do: Save this girl’s life in a way he never could for Lily? Or encourage her to suicide, so they can be together forever as reapers?

I received a copy of this book in exchange for my honest opinion.

At the age of 17, Rogue commits suicide two days after his girlfriend is killed in a car accident during which he was driving. Now, he works as a reaper for Death. His job is to reap the souls of others who commit suicide, not to intervene and save them, but that is exactly what he does for Emerson. Emerson is the spitting image of Rogue’s girlfriend, Lily. How can he not save her this time when he wasn’t able to save her last time? So, when Rogue stops Emerson a second time, he is sent to earth in someone else’s body for one week. His mission: convince Emerson not to kill herself or Death will steal her soul and torture her as he does the rest of the reapers. As Rogue and Emerson spend the week together, they begin to have feelings for each other. When Death makes Rogue an offer, will he be able to convince Emerson to stay with him forever or will he be able to give her up and let her live?

This was an enjoyable, quick read. Rogue is a great hero. He is a really good guy and not the screwed up, hot, alpha male that we have come to know and love. We learn more about Emerson as the story moves along. She seems to have it all, but she has her secrets.

The story is written from Rogue’s point of view, which I loved. We get to meet Rogue’s friend/fellow reapers. I really enjoyed seeing the relationships he has built with each of these characters. These relationships show the kind of person Rogue really is…he cares for people and tries to bring his friends a little happiness in a place where none exists.

I would recommend this book for those who love YA books. I had it in my head that this was the first in a series, but I can’t find anything saying that for sure. It appears to be a stand alone. Although there were some sad sections, overall, this is an uplifting read about loss, love, and redemption.

This is a paranormal romance book that focuses primarily on Rogue, who is a reaper working for death(who is quite unpleasant), and Emerson(yes, this is a guys name but she is a girl) she reminds rogue of his previous love but Emerson is on a suicidal path, and it is up to rogue to prevent that.

I really enjoyed the story, I've read a lot of books but none of them had a story quite like this, it is an original in an age where there isn't that much originality left. The character's show depth and the writing is pleasing, though i have to say i did not find the ending to be as refreshing as the rest of the book but i can say it is acceptable hence the four stars.

All in all i enjoyed the book and am sure anyone else who reads this will as well. Recommended to people who like paranormal and or romance books.

(reviewed the day of purchase)
leslie gordon reviewed on Jan. 2, 2014

I am such a fan of this book. I fell in love with the characters, thus making this book seem too short. Write more, J.B!!! I am keeping my eyes out for a sequel or possibly a new work of fiction from this awesome author.

Outstanding! J.B. Wayne is a masterful author whose talent will soon be discovered. The dialogue between characters is amazing; the blend of timeless and iconic music perfectly captures the theme of each chapter. Can't wait for the next book. Absolutely amazing!

You have subscribed to alerts for J.B. Wayne.

You have been added to J.B. Wayne's favorite list.

You can also sign-up to receive email notifications whenever J.B. Wayne releases a new book.